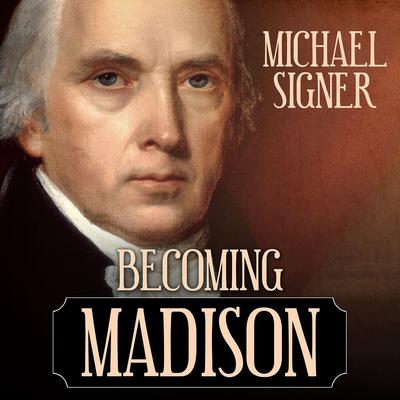 In Becoming Madison, Michael Signer takes a fresh look at the life of our fourth president. His focus is on Madison before he turned thirty-six, the years in which he did his most enduring work: battling with Patrick Henry—the most charismatic politician in revolutionary America, whose political philosophy and ruthless tactics eerily foreshadowed those of today's Tea Party—over religious freedom; introducing his framework for a strong central government; becoming the intellectual godfather of the Constitution; and providing a crucial role at Virginia's convention to ratify the Constitution in 1788, when the nation's future hung in the balance.
Signer's young James Madison is a role model for leaders today: a man who overcame daunting personal issues (including crippling anxiety attacks) to battle an entrenched and vicious status quo. His analysis of "Madison's Method," the means by which Madison systematically destroyed dangerous ideas and left in their stead an enduring and positive vision for the United States, is wholly original and uniquely relevant today.

A perfect introduction to a deeply private and immensely important man. —Kirkus
“Sound and revealing.” —Wall Street Journal
“Intellectual history at its finest…An essential biography of an essential Founder.” —Richmond Times-Dispatch
“In this engaging new study, Singer wrestles with the early life and career of James Madison and attempts to explain why Madison remains unheralded among the founding generation… According to Singer, however, Madison’s humble status in American memory is not a function of his failures but rather a product of his successes…Highly recommended.” —Choice
“This is less of a biography than an important study of the intellectual and psychological development of a young Madison who believed that leaders should forsake self-interest in promoting the common good. Signer urges contemporary politicians to emulate him.” —Library Journal
“The author offers some dramatic set pieces demonstrating Madison’s method in action…He’s particularly good at showing how Madison’s discipline, relentless logic, and faith in reason allowed him to triumph over his in-state antagonist, Patrick Henry. A perfect introduction to a deeply private and immensely important man.” —Kirkus Reviews
“David Colacci splendidly narrates Signer’s discussion of how James Madison—a relative unknown compared to Jefferson, Washington, and Adams—operated in the political sphere…Colacci’s baritone voice is expertly modulated, and his pacing is easy to follow and engaging.” —AudioFile

Michael Signer is an author, advocate, political theorist, and attorney. He has taught political theory, leadership, and governance at the University of Virginia, Virginia Tech, and the University of California. He was counsel to Governor Mark Warner in Richmond, senior policy advisor at the Center for American Progress, and a candidate for lieutenant governor of Virginia in 2009. Dr. Signer is the author of Demagogue: The Fight to Save Democracy from Its Worst Enemies. He lives with his wife and twin boys in Virginia.