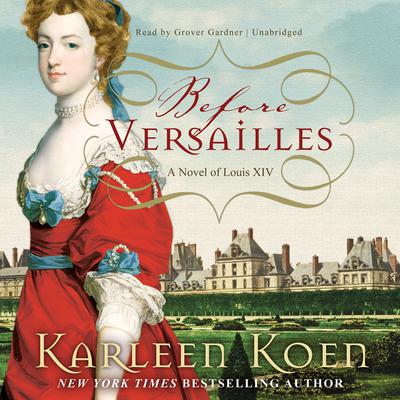 Before Versailles: A Novel of Louis XIV

New York Timesbestselling author Karleen Koen offers another delightful historical novel that will transport you to another time and place.

Louis XIV is one of the best-known monarchs ever to grace the French throne. But what was he like as a young man—the man before Versailles?

After the death of his prime minister, Cardinal Mazarin, twenty-two-year-old Louis steps in to govern France. He's still a young man, but one who, as king, willfully takes everything he can get—including his brother's wife. As the love affair between Louis and Princess Henriette burns, it sets the kingdom on the road to unmistakable scandal and conflict with the Vatican. Every woman wants him. He must face what he is willing to sacrifice for love.

But there are other problems lurking outside the chateau of Fontainebleau: a boy in an iron mask has been seen in the woods, and the king's finance minister, Nicolas Fouquet, has proven more powerful than Louis ever thought—a man who could make a great ally or become a dangerous foe.

Meticulously researched and brought vividly to life by the gorgeous prose of Karleen Koen, Before Versailles dares to explore the forces that shaped an iconic king and determined the fate of an empire.

“In this magnificently written and researched novel, Karleen Koen brings to vibrant life the early years and loves of the future Sun King.” —Jean M. Auel, New York Times bestselling author
“Before Versailles captivated me from start to finish! With exquisite finesse, Karleen Koen weaves history and myth into a sumptuous portrait of young Louis XIV, his intrigue-laden court, and the passionate, ambitious, often dangerous women who loved him.” —C. W. Gortner, author of The Last Queen
“This is a powerful, rich telling of a few months in the life of King Louis XIV. How clever to pick these particular months when so much is changed…It’s enthralling, fascinating, and wonderful story telling…Bravo!” —Romance Reviews
“Following solidly in the footsteps of Dumas…with her focus on the time just before Louis becomes the unrivaled Sun King, [Koen] finds the era ripe for intrigue and romance.” —Publishers Weekly
“With a handsome ruler as charismatic as Britain’s Henry Tudor, this focused retelling of the emergence of the Sun King will attract fans of the English king as well as Francophiles.” —Library Journal (starred review)
“Period detail and costumes abound throughout this lively royal romp.” —Booklist