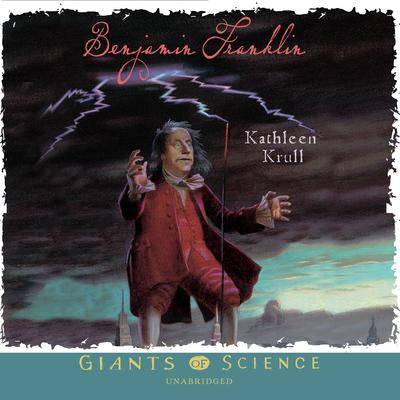 The Giants of Science Series: Book 7

Sure, almost all kids know Benjamin Franklin as one of America’s Founding Fathers, a man with a hand in both the Declaration of Independence and the US Constitution. And they may even have some vague idea that he once flew a kite during a lightning storm. What Kathleen Krull sets out to do in this very different biography is show Ben Franklin as the “natural philosopher” (the term for scientists back in the 1700s), whose experiments led to important discoveries about the nature of electricity—including his famous demonstration that electricity and lightning were one and the same.

As always, this much-lauded series presents a true Giant of Science in a juicily anecdotal way. This is social history at its best … who knew that Franklin became such a megastar that Paris shops sold Ben dolls, Ben ashtrays, and even Ben wallpaper?

Witty and engaging, this is a worthy addition to the Giants of Science series.

Kathleen Krull (1952–2021) was a multiaward–winning children’s book author. She graduated from Lawrence University in Appleton, Wisconsin, and worked for four companies as a children’s book editor. While on the job, she wrote mysteries in the Trixie Belden series and other books. She then began working at home, writing her own books and getting the chance to explore subjects she was passionate about, including history, music, and extraordinary people. Awards for her body of work include the 2011 Children’s Book Guild Nonfiction Award, Leo Politi Golden Author Award, Lucia Russell Briggs Distinguished Achievement Award, California Reading Association’s Armin R. Schulz Literacy Award for promoting social justice thru books 2016, and the International Literary Association and Greater San Diego Reading Association Celebrate Literacy Award, among others.