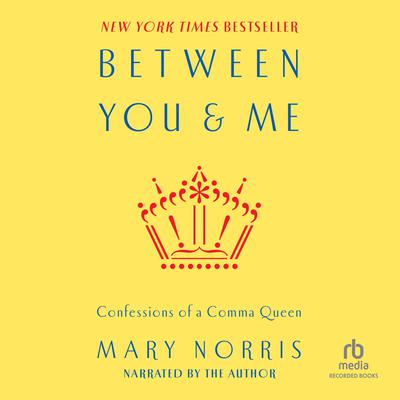 Between You and Me: Confessions of Comma Queen

Finalist for the Thurber Prize for American Humor

A Library Journal Best Audiobook of the Year

A BookPage Top Pick of the Month in Memoirs

Mary Norris has spent more than three decades in The New Yorker's copy department, maintaining its celebrated high standards. Now she brings her vast experience, good cheer, and finely sharpened pencils to help the rest of us in a boisterous language book as full of life as it is of practical advice. Between You & Me features Norris's laugh-out-loud descriptions of some of the most common and vexing problems in spelling, punctuation, and usage-comma faults, danglers, "who" vs. "whom," "that" vs. "which," compound words, gender-neutral language-and her clear explanations of how to handle them. Down-to-earth and always open-minded, she draws on examples from Charles Dickens, Emily Dickinson, Henry James, and the Lord's Prayer, as well as from The Honeymooners, The Simpsons, David Foster Wallace, and Gillian Flynn. She takes us to see a copy of Noah Webster's groundbreaking Blue-Back Speller, on a quest to find out who put the hyphen in Moby-Dick, on a pilgrimage to the world's only pencil-sharpener museum, and inside the hallowed halls of The New Yorker and her work with such celebrated writers as Pauline Kael, Philip Roth, and George Saunders. Readers-and writers-will find in Norris neither a scold nor a softie but a wise and witty new friend in love with language and alive to the glories of its use in America, even in the age of autocorrect and spell-check. As Norris writes, "The dictionary is a wonderful thing, but you can't let it push you around."

“[A] winningly tender, funny reckoning with labor and language.” —Vogue
“Very funny, lucid, and lively…part memoir, part language guide, and part personal account of life at the New Yorker.” —New Republic
“Hilarious…This book charmed my socks off.” —New York Times Book Review
“Hilarious and delightful…Who knew grammar could be so much fun…This is a celebration of language that won’t make anyone feel dumb.” —Amazon.com
“Thoughtful and humorous…[Between You & Me] is not your grade school primer; expect wisecracks and pointed commentary.” —Library Journal (starred review)
“An educational, entertaining narrative…Unforgettable anecdotes…Countless laugh-out-loud passages…A funny book for any serious reader.” —Kirkus Reviews (starred review)
“Norris…successfully communicates her enthusiasm for attention to detail.” —AudioFile
“With her love of language on full display, the self-titled ‘Comma Queen’ turns what could have been a tedious grammar manual into a witty and entertaining look at the rewards of expressing ourselves precisely.” —BookPage
“Lighthearted and sparkling.” —Booklist

Mary Norris is the author of Greek to Me and the New York Times bestseller Between You & Me, an account of her years in the New Yorker copy department.