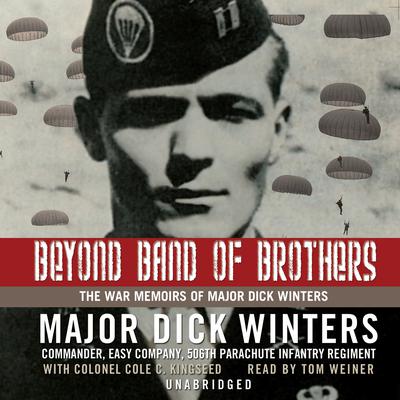 Beyond Band of Brothers: The War Memoirs of Major Dick Winters

In war, great commanders lead soldiers into hell to do the impossible.

They were called Easy Company—but their mission was never easy. Immortalized as the Band of Brothers, they suffered huge casualties while liberating Europe in an unparalleled record of bravery under fire. Dick Winters led them through the Battle of the Bulge, the attack on Foy—where Easy Company reached its breaking point—and finally into Germany, by which time each member had been wounded. Outside Munich, they liberated an S.S. death camp and captured Berchtesgaden, Hitler’s alpine retreat.

Beyond Band of Brothers is Winters’ memoir, based on his wartime diary, but it also includes his comrades’ untold stories. Only Winters was present from the activation of Easy Company until the war’s end. This is their story, told in his words for the first time.

“A poignant, riveting story with timeless application to the study of leadership in war.” —Colonel Lance Betros, chairman, Department of History, US Military Academy
“This riveting read clearly reflects Dick Winters’ solid character, great integrity, and unerring judgment in critical battlefield situations.” —Lieutenant General Harold G. Moore, coauthor of We Were Soldiers Once…And Young
“Its modesty, its candor, and its insights into the nature of frontline leadership and the fears and behaviors of men in combat make this memoir a classic.” —Dennis Showalter, author of Patton and Rommel
“Winters tells the tales left untold by Stephen Ambrose, whose Band of Brothers was the inspiration for the HBO miniseries…It is in the battles and tactical maneuvers of Easy Company that Winters is most at home…He carefully explicates the reasoning behind his strategy…The narrative is laced with Winters’ soldierly exaltations of pride in his comrades’ bravery.” —Publishers Weekly
“Tom Weiner narrates in a deep, youthful voice that is easy to imagine as that of a forceful and charismatic Army officer.” —AudioFile
“An excellent narrative voice…Winters has been praised as an exemplar of leadership, and here he shows what he did to earn that praise and how he did it. Very well done, book as well as war service.” —Booklist

Major Dick Winters was born in Pennsylvania in 1918 and graduated from Franklin & Marshall College in 1941. Released from military service in November 1945, he returned briefly to active duty during the Korean War, then spent his life on a small Pennsylvania farm and was a successful businessman.

Colonel Cole C. Kingseed is a thirty-year Army veteran who served in a variety of command and staff positions. He earned his MA in national security and strategic studies from the US Naval War College and his PhD in history from Ohio State. He taught at West Point, where he served as chief of military history for four years. Kingseed is the author of more than fifty articles on corporate and military leadership and such books as Eisenhower and the Suez Crisis of 1956 and Old Glory Stories: Combat Leadership in World War II. He is a founding partner of Battlefield Leadership, LLC, and president of his own leadership consulting firm, the Brecourt Leadership Experience, whose clients include International Paper, Ernst & Young, USAA, and Bayer, among others.