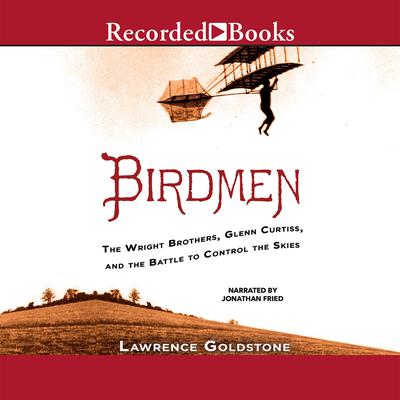 Birdmen: The Wright Brothers, Glenn Curtiss, and the Battle to Control the Skies

Wilbur and Orville Wright are two of the greatest innovators in history, and together they solved the centuries-old riddle of powered, heavier-than-air flight. Glenn Hammond Curtiss was the most talented machinist of his day; he first became the fastest man alive when he perfected the motorcycle, then turned his eyes toward the skies to become the fastest man aloft. But between the Wrights and Curtiss bloomed a poisonous rivalry and a patent war so powerful that it shaped aviation in its early years and drove one of the three men to his grave. Birdmen is at once a thrilling ride through flight's wild early years and a surprising look at the battle that defined an era of American innovation. Lawrence Goldstone is the author or co-author of fourteen books of fiction and nonfiction, most recently LEFTY: An American Odyssey. His work has been profiled in the New York Times, The Toronto Star, Salon, and Slate, among others. He lives on Long Island with his wife and daughter.

“A riveting narrative about the pioneering era of aeronautics in America and beyond…a well-written, thoroughly researched work that is sure to compel readers interested in history, aviation, and invention. Goldstone raises questions of enduring importance regarding innovation and the indefinite exertion of control over ideas that go public.” —Publishers Weekly (starred review)
“Superbly crafted…strengthened by fresh perspectives, rigorous analyses, comprehensible science, and a driving narrative.” —Library Journal (starred review)

Lawrence Goldstone is the author or coauthor of fourteen books of fiction and nonfiction, including Rights, which won a New American Writing Award, and Anatomy of Deception, a New York Times notable mystery. His articles, reviews, and opinion pieces have appeared in the Wall Street Journal, Boston Globe, Los Angeles Times, Chicago Tribune, and other periodicals. He has appeared on many TV and radio shows, and his work has been profiled in the New York Times, Toronto Star, Salon, and Slate.