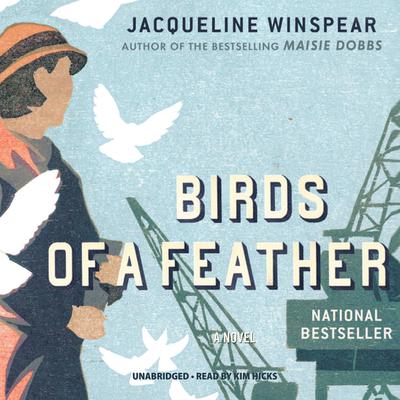 Birds of a Feather: A Novel

Winner of the 2004 Agatha Award for Best Novel

Maisie Dobbs is back, and this time she has been hired to find a wealthy grocery magnate’s daughter who has fled from home. What at first seems a simple case becomes complicated when Maisie learns of the recent violent deaths of three of the heiress’ old friends. Is there a connection between her mysterious disappearance and the murders? Who would kill such charming young women? As Maisie investigates, she discovers that the answers to all her questions lie in the unforgettable agony of the Great War.

Don’t miss this second adventure with one of literature’s favorite sleuths!

“A good second novel is one that, like Birds of a Feather, makes you want to read its predecessor.” —New York Times Book Review
“[If you] were a fan of the 1970s BBC program Upstairs, Downstairs, you’ll love Winspear’s Birds of a Feather.” —Denver Post
“Birds of a Feather succeeds both as a suspenseful mystery and as a picture of a time and place.” —Boston Globe
“[A] chilling, suspenseful sequel…As in her first novel, the author gives an intelligent and absorbing picture of the period, providing plentiful details for the history buff without detracting from the riveting mystery. Readers will be eager to see more of the spunky Maisie, with her unusual career as a one-time maid, nurse, and university student.” —Publishers Weekly
“Sinking into a novel this good is as satisfying as sinking into a good leather chair: we know we are in for the duration, and it feels right…Maisie, who has gone from being in service to a graduate of Girton at Cambridge, is as intelligent and engaging a sleuth as one might desire; the period touches, from clothing to manners, are not only elegantly presented but unostentatious.” —Booklist
“There is much substance to this mystery, which mines the situations brought about by the horrors of the war—both on the front and at home, and its still simmering aftermath—plus a hint of romance and the beginning resolution of two father-daughter rifts. The story flows easily, descriptions are vivid and apt, and character is limned quickly, with each an individual. This is an utterly enjoyable and painless history lesson and a well-plotted and consistent mystery.” —School Library Journal
“If the third time is a charm, then Winspear has a head start…Both heartfelt and thrilling, Birds of a Feather is that rare new breed, a distinctive entry into the crowded mystery genre.” —Bookmarks