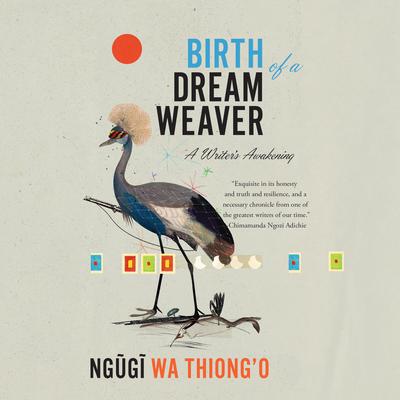 Birth of a Dream Weaver: A Writer's Awakening

"Exquisite in its honesty and truth and resilience, and a necessary chronicle from one of the greatest writers of our time." —Chimamanda Ngozi Adichie, The Guardian, Best Books of 2016.

"Every page ripples with a contagious faith in education and in the power of literature to shape the imagination and scour the conscience." —The Washington Post

From one of the world’s greatest writers, the story of how the author found his voice as a novelist at Makerere University in Uganda

Birth of a Dream Weaver charts the very beginnings of a writer’s creative output. In this wonderful memoir, Kenyan writer Ngũgĩ wa Thiong’o recounts the four years he spent at Makerere University in Kampala, Uganda—threshold years during which he found his voice as a journalist, short story writer, playwright, and novelist just as colonial empires were crumbling and new nations were being born—under the shadow of the rivalries, intrigues, and assassinations of the Cold War.

Haunted by the memories of the carnage and mass incarceration carried out by the British colonial-settler state in his native Kenya but inspired by the titanic struggle against it, Ngũgĩ, then known as James Ngugi, begins to weave stories from the fibers of memory, history, and a shockingly vibrant and turbulent present.

What unfolds in this moving and thought-provoking memoir is simultaneously the birth of one of the most important living writers—lauded for his "epic imagination" (Los Angeles Times)—the death of one of the most violent episodes in global history, and the emergence of new histories and nations with uncertain futures.

“Evocative, poignant, and thoughtful, Thiong’o’s courageous narrative will linger in readers’ minds. —Publishers Weekly (starred)
A writer's coming-of-age tale featuring an artistic mix of pride and humility. —Kirkus Reviews
An autobiographical masterpiece. . . As essential as Achebe’s There Was a Country, this is a riveting read in African history and literature. —Library Journal (starred)
This is a powerful recollection of a turbulent time that produced leaders from Tom Mboya and Jomo Kenyatta to the tyrannical Idi Amin in response to the brutality of a dying colonialism. —Booklist