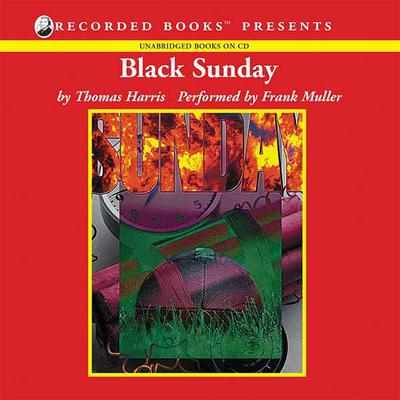 Best-selling novelist Thomas Harris has established himself as an indisputable master of suspense with The Silence of the Lambs. In Black Sunday, he builds a chillingly realistic "what if?" scenario around one of the world's most widely anticipated annual sporting events-and a man intent on turning it into a bloodbath beyond imagining. Though few would suspect it by looking at him, Michael Lander is the most dangerous man in America. A disgruntled veteran with a fascination for explosives, he pilots television blimps over packed sports stadiums each weekend. When a beautiful terrorist operative hands him the explosive firepower he needs, Lander sets in motion a plan that could turn Super Bowl Sunday into the darkest day in American history. Filled with the compelling characters and non-stop action Harris is famous for, Black Sunday will keep listeners thrilled from its opening sentence through its final, fiery pages. Narrator Frank Muller's rousing narration highlights every stirring moment.

Thomas Harris is the author of the #1 New York Times bestseller Hannibal. He began his writing career covering crime in the United States and Mexico, and was a reporter and editor for the Associated Press in New York City. The first four of his Hannibal Lecter novels have been made into films, most famously with actor Anthony Hopkins as Hannibal; the film version of his book The Silence of the Lambs swept the Academy Awards in 1991, winning Best Picture, Best Director, Best Actor, Best Actress, and Best Adapted Screenplay.