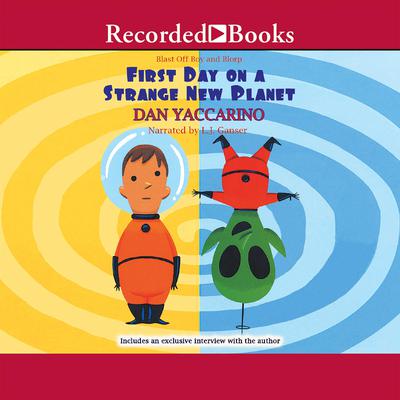 Blast Off Boy and Blorp: First Day on a Strange New Planet

Blast Off Boy is headed to the planet Meep as an exchange student. And on his way to Earth is Blorp Glorp, a little green alien boy. Blast Off Boy isn't too happy about the whole thing. Blorp is excited. But on their first day at each other's school, nothing goes the way they planned. On the bus, Blast Off Boy sits next to a kid with two heads. Gross. Later in the day, he gets swallowed by the purple ooze lunch special, which he was supposed to eat. In chemistry class on planet Earth, Blorp drinks a mixture that makes him grow as high as the ceiling. Too bad he gets a week of detention. Children will delight in the comic adventures of these two well-meaning misfits. Author Dan Yaccarino was inspired to write this story based on his own experience starting a new school at age 10. Narrator L.J. Ganser voices the bewilderment of being transplanted to a strange setting while capturing each zany calamity.

Dan Yaccarino is an internationally acclaimed author-illustrator with more than thirty books to his credit. Dan is also the creator of the animated TV series Oswald. He lives in New York City with his wife and two children.