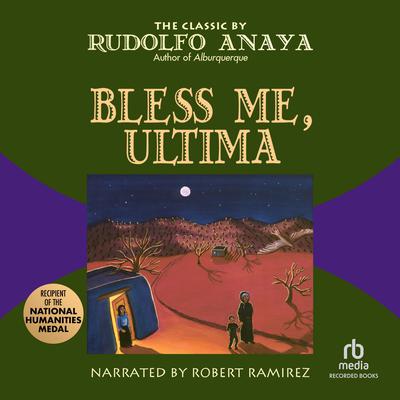 Exquisite prose and wondrous storytelling have helped make Rudolfo Anaya the father of Chicano literature in English. Indeed, Anaya's tales fairly shimmer with the haunting beauty and richness of his culture. The winner of the Pen Center West Award for Fiction for his unforgettable novel Alburquerque, Anaya is perhaps best loved for his classic bestseller, Bless Me, Ultima... Antonio Marez is six years old when Ultima comes to stay with his family in New Mexico. She is a curandera, one who cures with herbs and magic. Under her wise wing, Tony will probe the family ties that bind and rend him, and he will discover himself in the magical secrets of the pagan past-a mythic legacy as palpable as the Catholicism of Latin America. And at each life turn there is Ultima, who delivered Tony into the world...and will nurture the birth of his soul.

Rudolfo Anaya is professor emeritus of English at the University of New Mexico. He has received numerous literary awards, including the Premio Quinto Sol and a National Medal of Arts. He is the author of the classic work Bless Me, Ultima, which was chosen for the National Endowment for the Arts’ Big Read. Anaya’s other books for adults include Tortuga, Heart of Aztlan, Alburquerque, Rio Grande Fall, Shaman Winter, Jemez Spring, Serafina’s Stories, The Man Who Could Fly and Other Stories, and Rudolfo Anaya: The Essays. His children’s books include Farolitos of Christmas, My Land Sings, Elegy on the Death of Cesar Chavez, Roadrunner’s Dance, and The First Tortilla. Bless Me, Ultima was adapted into a feature film in 2013. Anaya resides in Albuquerque, New Mexico.