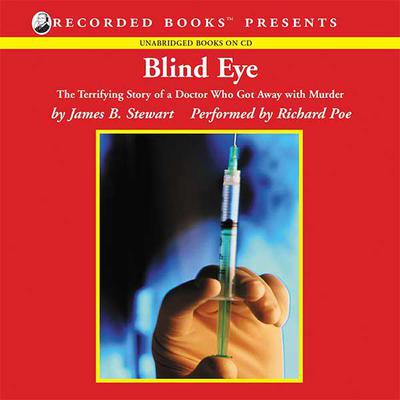 Blind Eye: The Terrifying Story of a Doctor Who Got Away with Murder

By James B. Stewart
Read by Richard Poe

Pulitzer Prize-winning journalist James B. Stewart cracked the New York Times best-seller list with this riveting true crime book. Blind Eye is the shocking story of Michael Swango, a physician who may be the most prolific serial killer in American history. From the moment he began medical school, people thought Swango was peculiar. He seemed woefully incompetent in classwork, showed no empathy for patients, and was obsessed with violent death. When he interned at Ohio State, patients started dying mysteriously. Then, Swango was jailed for poisoning several co-workers. Incredibly, after his release from prison, he secured hospital positions in South Dakota and New York--and the body count continued to rise. Although suspected by the FBI of possibly 60 murders, Swango has never been convicted of anything worse than fraud. Stewart's remarkable reporting is a horrifying, yet fascinating and incredibly important look at flaws in the medical profession that possibly allowed dozens of murders to go unpunished. Richard Poe's narration captures the urgency of this book's alarming message.

James B. Stewart is the author of several books, including the New York Times bestsellers Blood Sport and Den of Thieves. He is a columnist for the New York Times and a professor at Columbia Journalism School. In 1988 he won a Pulitzer Prize for his reporting on the stock market crash and insider trading.