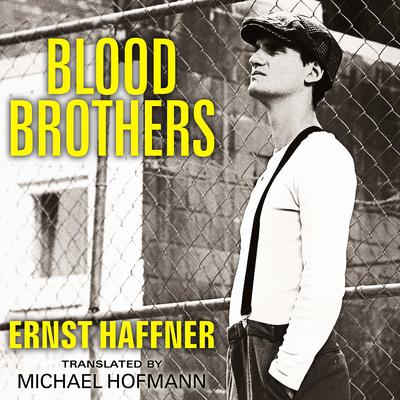 By Ernst Haffner
Translated by Michael Hofmann
Introduction by Herbert A. Arnold
Read by Michael Page

Blood Brothers is the only known novel by German social worker and journalist Ernst Haffner, of whom nearly all traces were lost during the course of World War II. Told in stark, unsparing detail, Haffner’s story delves into the illicit underworld of Berlin on the eve of Hitler’s rise to power, describing how these blood brothers move from one petty crime to the next, spending their nights in underground bars and makeshift hostels, struggling together to survive the harsh realities of gang life, and finding in one another the legitimacy denied them by society.

The characters are engaging, and multidimensional. —The Wall Street Journal
“Haffner’s project is journalistic, to portray destitution and criminality without the false sparkle of glamour—though Berlin is not half as boring as he (coyly) claims. The author was a social worker and a journalist, and his skill in portraiture and the depiction of a social milieu is evident… The characters are engaging, and multidimensional. You care what happens to them.” —Wall Street Journal
“[Haffner] has the eye of a documentarian and a keen interest in particulars.” —New York Times
“Haffner’s book stands out for its documentary detail. It opens with a description of the hours-long queues at the labor exchange, and paints a vivid picture of the gang’s initiation ceremonies, drinking rituals, and the glorious satisfaction of hot pea soup on an empty stomach. At the same time, Blood Brothers is plot-driven and told in a simple, straightforward, style.” —Guardian