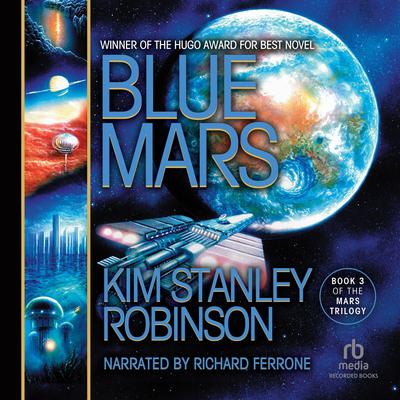 Winner of the 1997 Hugo Award for Best Novel

Acclaimed visionary author Kim Stanley Robinson is a Hugo and Nebula Award-winner. Blue Mars is the final volume in Robinson's seminal science fiction trilogy which began with Red Mars and continues with Green Mars. The once red and barren terrain of Mars is now green and rich with life--plant, animal, and human. But idyllic Mars is in a state of political upheaval, plagued by violent conflict between those who would keep the planet green and those who want to return it to a desert world. Meanwhile, across the void of space, old, tired Earth spins on its decaying axis. A natural disaster threatens to drown the already far too polluted and overcrowded planet. The people of Earth are getting desperate. Maybe desperate enough to wage interplanetary war for the chance to begin again. Blue Mars is a complex and completely enthralling saga--as convincing and lushly imagined a future as anyone has ever dreamed. Richard Ferrone narrates this sweeping epic with engaging personality and finesse.

Kim Stanley Robinson is a bestselling author and winner of the Hugo, Nebula, and Locus awards. He is the author of more than twenty books, including the bestselling Mars trilogy and the critically acclaimed Forty Signs of Rain, The Years of Rice and Salt, and 2312. In 2008, he was named a “Hero of the Environment” by Time magazine, and he works with the Sierra Nevada Research Institute. For his book Antarctica, he was sent to the Antarctic by the US National Science Foundation as part of their Antarctic Artists and Writers’ Program.