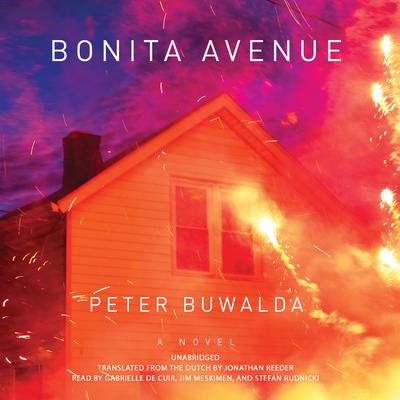 A Publishers Weekly Pick of the Week, January 2015

Siem Sigerius is a beloved, brilliant professor of mathematics with a promising future in politics. His family—including a loving wife, two gorgeous, intelligent stepdaughters, and a successful future son-in-law—and carefully appointed home in the bucolic countryside complete the portrait of a comfortable, morally upright household. But there are elements of Siem's past that threaten to upend the peace and stability that he has achieved, and when he stumbles upon a deception that's painfully close to home, things begin to fall apart. A cataclysmic explosion in a fireworks factory, the advent of Internet pornography, and the reappearance of a discarded, dangerous son all play a terrible role in the spectacular fragmentation of the Sigerius clan.

A riveting portrait of a family in crisis and the ways that even the smallest twists of fate can forever change our lives, Bonita Avenue is an incendiary, unpredictable debut of relationships torn asunder by lies and minds destroyed by madness.

“No way that this is a debut novel, is your first impression when you start reading Bonita Avenue––but it is! An instant literary classic, loaded with suspense, by a brilliant and truly original writer.” —Herman Koch, New York Times bestselling author of The Dinner
“A robust dark farce in the manner of Iris Murdoch at her most manic. Other reviewers have compared Buwalda to Jonathan Franzen. Whatever literary benchmark you use, the book’s hyperbolic excess and willingness to plunge recklessly to the depths are what make it work…the plot orchestration and lively character renderings of Bonita Avenue are dazzling…the brash destructive energy of Buwalda’s convoluted tale comes through loud and clear.” —New York Times Book Review
“Fluent and complex, uncompromising and shocking.” —Daily Mail (London)
“One wild ride: a swirling helix of a family saga that swerves from gross-out sex comedy to pitch-black revenge tragedy as twist after twist reframes what we know about its dysfunctional cast…manic…as toe-curling as early Roth, as roomy as Franzen, and as caustic as Houellebecq.” —Sunday Telegraph (London)
“Dazzling…Critics hailed Buwalda as ‘the Dutch answer to Jonathan Franzen,’ but his brilliance is entirely unique.” —Times (London)
“A literary sensation…[A] crazy-paving, jigsaw puzzle…Addictive…A considerable achievement…Bonita Avenue is an entertaining end in itself and evidence that Buwalda is just getting started.” —Independent (London)
“Magnificent…Three uniquely unreliable voices narrate this darkly humorous familial drama…Their interweaving narratives, which hop between the Netherlands, Shanghai, Belgium, and California, chart the years between the rise and fall of their outwardly successful but privately dysfunctional family.” —Publishers Weekly (starred review)
“This award-winning debut novel is flat-out extraordinary. The rich layer of detail would be impressive if applied to one topic, but Buwalda creates multiple complex worlds around vastly different subjects…An outstanding literary suspense story that will appeal to a wide range of readers.” —Library Journal (starred review)
“This tumultuous saga of a family breaking down…is an international bestseller and award winner. A significant literary achievement.” —Booklist (starred review)

Peter Buwalda worked as a journalist and editor before founding a music magazine and writing a weekly column for a major Dutch newspaper. He lives in the Netherlands with his family.