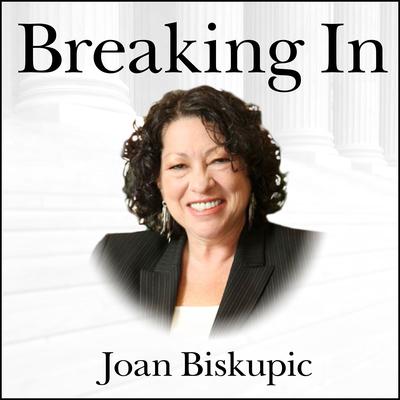 Breaking In: The Rise of Sonia Sotomayor and the Politics of Justice

In Breaking In, veteran journalist Joan Biskupic tells the story of how two forces providentially merged—the large ambitions of a talented Puerto Rican girl raised in the projects in the Bronx and the increasing political presence of Hispanics, from California to Texas, from Florida to the Northeast—resulting in a historical appointment. And this is not just a tale about breaking barriers as a Puerto Rican. It's about breaking barriers as a justice. As a Supreme Court justice, Sonia Sotomayor has shared her personal story to an unprecedented degree. And that story—of a Latina who emerged from tough times in the projects not only to prevail but also to rise to the top—has even become fabric for some of her most passionate comments on matters before the Court. But there is yet more to know about the rise of Sotomayor. Breaking In offers the larger, untold story of the woman who has been called "the people's justice."

A balanced but also admiring portrait of a Latina, a jurist and a trailblazer. —Kirkus
“Biskupic combines scholarly rigor with a bit of human admiration in this clear-eyed account of how someone advances a judicial career in twentyfirst-century America.” —Kirkus Reviews
“A remarkable book about an extraordinary woman in very challenging times.” —Jorge Ramos, anchor, Univision/Fusion
“Joan Biskupic has written a fascinating story, at once shrewd and sympathetic, about overcoming the fear of failure. Biskupic takes you into the head and the heart of the most interesting Supreme Court justice since … well there’s never been a justice like Sotomayor.” —Evan Thomas, author of Ike’s Bluff: President Eisenhower’s Secret Battle to Save the World

Joan Biskupic has covered the US Supreme Court for more than twenty years and is the author of several books, including American Original: The Life and Constitution of Supreme Court Justice Antonin Scalia and Sandra Day O’Connor: How the First Woman on the Supreme Court Became Its Most Influential Justice. She is also editor-in-charge for legal affairs at Reuters news. Before joining Reuters in 2012, she was the Supreme Court correspondent for the Washington Post and for USA Today. A graduate of Georgetown University Law Center, she is a regular panelist on PBS’s Washington Week with Gwen Ifill. Joan lives in Washington, DC, with her husband and daughter.