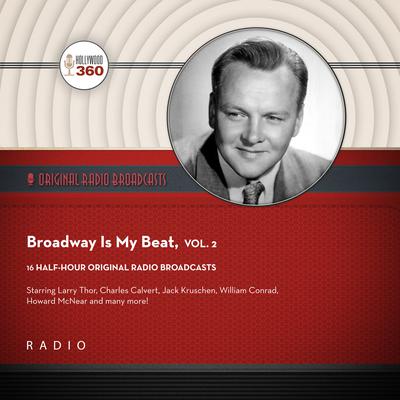 Broadway Is My Beat, Vol. 2

New York City Detective Danny Clover worked homicide “from Times Square to Columbus Circle—the gaudiest, the most violent, the lonesomest mile in the world—Broadway, my beat.”

Broadway Is My Beat was a dark, gritty radio crime drama that ran on CBS from 1949 until 1954. The series was originally broadcast from New York with Anthony Ross portraying Times Square Police Detective Danny Clover. Produced by Lester Gottlieb, it was directed by John Dietz. By the thirteenth episode, the series moved to Hollywood (still set in NYC) with producer Elliott Lewis directing a new cast with scripts by Morton Fine and David Friedkin (the duo that would later write and develop TV’s popular secret-agent series I Spy). The opening theme of “I’ll Take Manhattan” introduced Detective Danny Clover (now played by Larry Thor) as a hardened New York City copy who worked homicide. Clover narrated tales of the Great White Way to the music of Wilbur Hatch and Alexander Courage. The recreation of Manhattan’s rich, aural tapestry required the talents of three sound effects artists. Cast regulars included Charles Calvert (as Sgt. Gino Tartaglia) and Jack Kruschen (as Sgt. Muggavan). Now, enjoy sixteen of the finest episodes from this excellent crime series in this collection.