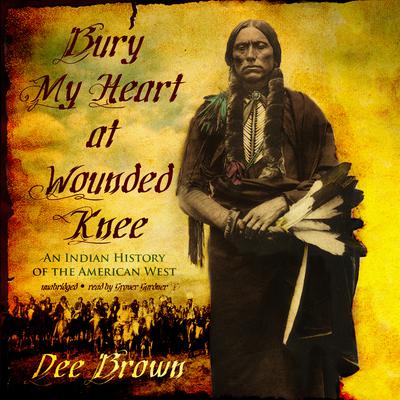 Bury My Heart at Wounded Knee: An Indian History of the American West

An AudioFile Best Audiobook of the Year in 2010

Immediately recognized as a revelatory and enormously controversial book since its first publication in 1971, Bury My Heart at Wounded Knee is universally recognized as one of those rare books that forever changes the way its subject is perceived.

Bury My Heart at Wounded Knee is Dee Brown’s classic, eloquent, meticulously documented account of the systematic destruction of the American Indian during the second half of the nineteenth century. Using council records, autobiographies, and firsthand descriptions, Brown allows great chiefs and warriors of the Dakota, Ute, Sioux, Cheyenne, and other tribes to tell us in their own words of the series of battles, massacres, and broken treaties that finally left them and their people demoralized and decimated. A unique and disturbing narrative told with force and clarity, Bury My Heart at Wounded Knee changed forever our vision of how the West was won—and lost. It tells a story that should not be forgotten, and so must be retold from time to time.

“Original, remarkable, and finally heartbreaking…Impossible to put down.” —New York Times
“Shattering, appalling, compelling…One wonders…who indeed were the savages.” —Washington Post
“Fascinating and painful.” —Wall Street Journal
“A first-rate account—strongly and ardently written.” —New Yorker
“Grover Gardner is an exceptional narrator. With only small changes in the tone of his voice and the pacing of his narration, he can express an author’s surprise, excitement, or outrage. In this way, he carries a reading along without artifice, making for a smooth listening experience. He shows these skills well in this history of American Indians from 1860 to 1890. It would be all too easy to read the work in a clinical, detached way or with an over-the-top sense of outrage at the ill treatment and abuse of America’s original inhabitants. But Gardner carries it off nicely. Furthermore, his able, clear pronunciation of Native American names makes them seem commonplace, with no hesitation or awkwardness. —AudioFile
“This 1970 volume greatly changed the view of pioneers’ westward advancement. Based largely on primary source materials, this volume details how white settlers forced Indian tribes off the plains, often simply by killing them. Though Hollywood and penny dreadfuls portrayed Indians as red devils who launched unprovoked attacks on innocent homesteaders, Brown’s research shows that the opposite is closer to the truth…An essential purchase.” —Library Journal
“Mind-blowing…It’s all about the history that we aren’t taught. And the whole idea of spirituality that we’re not taught either, even though it’s a huge part of who we are. Genocide is also part of who we are. We are a people guilty of annihilation—for all practical purposes—of an entire race. It’s about our arrogance, about believing that we are superior to other human beings simply because we look different or whatever. Or because we wanted the land where they were and thought they were misusing it.” —Steve Earle, singer, songwriter, and author

Dorris Alexander “Dee” Brown (1908–2002), born in Alberta, Louisiana, grew up in Arkansas, where he became friends with Native Americans. He worked as a reporter in Harrison, Arkansas, before becoming a teacher and librarian. He is the author of over twenty-five books on the American West and the Civil War.