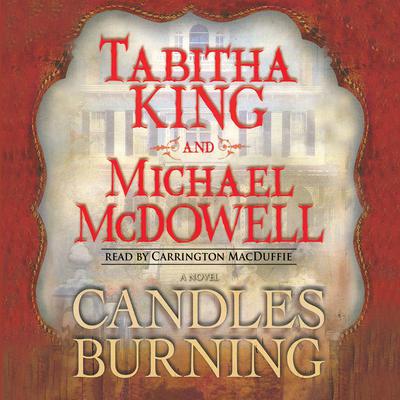 By Tabitha King and Michael McDowell
Read by Carrington MacDuffie

Author Michael McDowell, known for his chilling Blackwater series, left behind the unfinished manuscript of Candles Burning upon his death in 1999. His close friend, Tabitha King, has taken up where he left off, weaving a Southern gothic fabric of murder, guilt, innocence, corruption, and survival, in the voices of the living and the dead.

Seven-year-old Calley Dakin is daddy’s little girl, but her well-born mother persists in her contempt for the Dakin name. When her daddy is tortured and murdered by two women with no discernible motivation, Calley and her mother find themselves caught up in inexplicable events that exile them to Pensacola Beach. There, another woman awaits their presence, a woman who knows what Calley is and who seeks to control her—for Calley is no ordinary little girl.

“A mix of magic realism and Southern gothic, this stunning collaboration…moves at a hypnotic pace, like an Alabama water moccasin slipping through black water.” —Publishers Weekly (starred review)
“MacDuffie portrays the child Calley with a little girl voice and a mild Southern accent yet still manages to convey a child who is smarter than her years…As the story develops, King and MacDuffie slowly reveal the how and why of Calley’s gift.” —AudioFile
“[A] lightly supernatural confection…King completes it beautifully as to tone, aura, and flavor, and it's funny and intriguing, magnetically readable.” —Booklist
“This is Truman Capote/Carson McCullers country with a Pandora guided by ghostly voices…grand and deeply satisfying.” —Peter Straub, New York Times bestselling author

Tabitha King is the acclaimed author of Small World, Survivor, The Book of Reuben, and many other titles. The wife of novelist Stephen King, she lives in Maine.

Michael McDowell (1950–1999) was an American novelist and screenwriter, the author of numerous mysteries, psychological thrillers, and horror novels, including the six volumes of the Blackwater series. In 1985 he wrote the screenplay for the movie Clue, which was based on the board game and included three different endings.