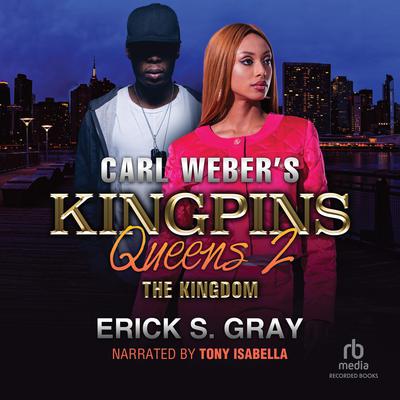 From a murderous Bonnie and Clyde stirring up a hornet’s nest to a drug war and the rise of heroin overdoses, Detectives Michael Acosta and Chris Emerson are tasked with investigating the rash of robberies and brutal murders happening in the borough. Queens is bubbling with heated violence, as rival kingpins vie for power in Erick S. Gray’s intense addition to the bestselling Kingpins series.

It’s a new millennium, and Nasir’s finally coming home from doing a bullet on Riker’s Island for a petty drug charge. He’s lost everything, and he craves to come up again in the streets and take back his power and respect.

One night in a strip club, Nasir reunites with Denise, the sister of his best friend, Sincere. Their friendship turns sexual, and they fall deeply in love. Nasir comes up with a master plan, and they set out to rob drug dealers, becoming the new Bonnie and Clyde of South Jamaica, Queens.

Sincere is livid when he hears news about his little sister hooking up with his old partner in crime. Nasir has become a dangerous man, and he’s dragging Denise down a dangerous path. However, Sincere is locked away upstate, unable to get to his sister. So, he calls in some favors and does the unthinkable. He places a hit on his old best friend.

Meanwhile, Zulu is the new power in the neighborhood, a fierce drug kingpin who runs Queens and New York City with an iron fist—until he gets knocked by the Feds. There’s a snitch in his crew, and this informant’s testimony could send him away for life.

Zulu gives Zodiac, his right-hand man, the task of killing this rat before he can testify, but Zodiac has other plans. He wants to run the organization, and that’ll be easier with Zulu out of the way. As Zodiac works to build his kingdom, it sparks a civil war in the organization.

Erick S. Gray is the author of more than a dozen works of urban fiction since his debut novel, Booty Call, was published in 2003 and sold tens of thousands of copies. He has also contributed to many anthologies, including three volumes of Streets of New York, with Mark Anthony and Anthony Whyte. His focus is on great storytelling, with characters that are memorable and true-to-life.