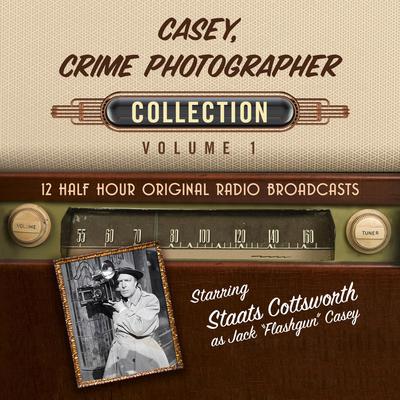 The character of Jack “Flashgun” Casey was first penned by former newspaper and advertising executive, George Harmon Coxe, Jr. in the March 1934 issue of Black Mask, the legendary Pulp Magazine. Casey was a cameraman who took photographs that accompanied reporter’s newspaper stories. His keen eye for detail served him well with solving the crimes he was assigned to photograph. “Flashgun Casey” was an instant success with the Black Mask readers and soon made the leap to the silver screen and to radio. Jim Backus (TV’s Thurston Howell the Third) was radio’s first Casey, but was replaced early on by Staats Cotsworth. Casey was aided in his amateur detecting by his fellow reporter Ann Williams (Jan Miner, best known as Madge, the spokeswoman for Palmolive) who, like Casey, worked for The Morning Express. When not at work, they frequented The Blue Note Café, a late night lounge where bartender, Ethelbert, provided both a sounding board and levity for Casey and Ann as they awaited their next call to a crime scene. “Casey, Crime Photographer” ran on radio from 1943 until 1955, sponsored for most of its run by Anchor Hocking Glass, and made the transition to TV with Richard Carlyle and later, Darren McGavin in the title role.