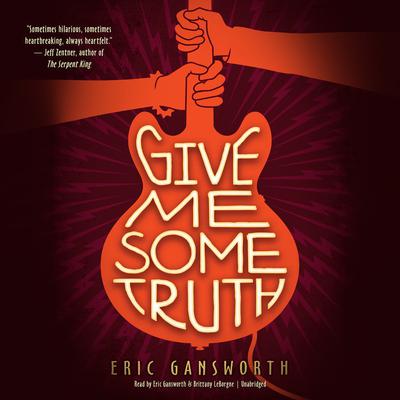 Give Me Some Truth

A powerful new book from Eric Gansworth, author of If I Ever Get Out of Here, that speaks the truth on race, relationships, and rock from two unforgettable perspectives.

Carson Mastick is entering his senior year of high school and desperate to make his mark, on the reservation and off. A rock band—and winning the local Battle of the Bands, with its first prize of a trip to New York City—is his best shot. But things keep getting in the way. Small matters like the lack of an actual band, or the fact that his brother just got shot confronting the racist owner of a local restaurant.

Maggi Bokoni has just moved back to the reservation from the city with her family. She’s dying to stop making the same traditional artwork her family sells to tourists (conceptual stuff is cooler), stop feeling out of place in her new (old) home, and stop being treated like a child. She might like to fall in love for the first time too.

Carson and Maggi—along with their friend Lewis—will navigate loud protests, even louder music, and first love in this stirring novel about coming together in a world defined by difference.

“Gansworth vividly captures the difficulties of reservation life and showcases his thoughtful protagonists’ multidimensional interests and far-reaching aspirations.” —Publishers Weekly
“A stunning and powerful story about kids on the edge and what it means to break free of tradition and expectations. This book should be on every high school reading list.” —Kathleen Glasgow, New York Times bestselling author
“Gansworth’s follow-up to If I Ever Get Out of Here has an incredible voice…His characters are rich, well developed, and will stay with readers for a long time…A stellar choice for YA realistic fiction shelves.” —School Library Journal, starred review