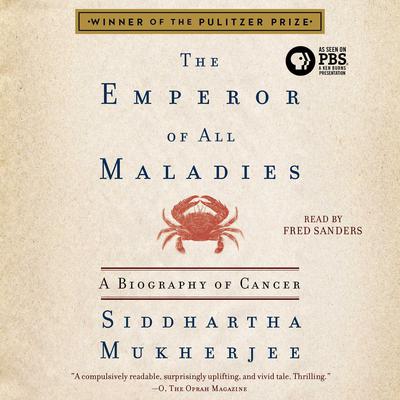 The Emperor of All Maladies: A Biography of Cancer

Winner of the 2011 Pulitzer Prize for General Nonfiction

Winner of the Books for a Better Life Award

A London Guardian Pick of Best Book of the 21st Century

A Time Magazine Top 10 Book of the Decade in Nonfiction

Winner of the Pulitzer Prize, and now a documentary from Ken Burns on PBS, The Emperor of All Maladies is a magnificent, profoundly humane “biography” of cancer—from its first documented appearances thousands of years ago through the epic battles in the twentieth century to cure, control, and conquer it to a radical new understanding of its essence.

Physician, researcher, and award-winning science writer, Siddhartha Mukherjee examines cancer with a cellular biologist’s precision, a historian’s perspective, and a biographer’s passion. The result is an astonishingly lucid and eloquent chronicle of a disease humans have lived with—and perished from—for more than five thousand years.

The story of cancer is a story of human ingenuity, resilience, and perseverance, but also of hubris, paternalism, and misperception. Mukherjee recounts centuries of discoveries, setbacks, victories, and deaths, told through the eyes of his predecessors and peers, training their wits against an infinitely resourceful adversary that, just three decades ago, was thought to be easily vanquished in an all-out “war against cancer.” The book reads like a literary thriller with cancer as the protagonist.

From the Persian Queen Atossa, whose Greek slave may have cut off her diseased breast, to the nineteenth-century recipients of primitive radiation and chemotherapy to Mukherjee’s own leukemia patient, Carla, The Emperor of All Maladies is about the people who have soldiered through fiercely demanding regimens in order to survive—and to increase our understanding of this iconic disease.

Riveting, urgent, and surprising, The Emperor of All Maladies provides a fascinating glimpse into the future of cancer treatments. It is an illuminating book that provides hope and clarity to those seeking to demystify cancer.

“A compulsively readable, surprisingly uplifting, and vivid tale.” —O, The Oprah Magazine
“Mukherjee sets out on the breathtaking ambition of his study of cancer not only to share the knowledge of a practicing oncologist but to take his readers on a literary and historical journey.” —The Guardian (London)
“A story of pioneers and mavericks; of serendipity, risk-taking, and wild leaps of faith; of meetings of minds that changed medical history and obsessive experiments conducted in solitude.” —The Independent (London)
“Mukherjee’s formidable intelligence and compassion produce a stunning account of the effort to disrobe the ‘emperor of maladies.’” —Publishers Weekly (starred review)