The Twenty-Ninth Day: Surviving a Grizzly Attack in the Canadian Tundra

Finalist for the 2020 Minnesota Book Award

An Outside Magazine Pick of Best Winter Books

A six-hundred-mile canoe trip in the Canadian wilderness is a seventeen-year-old’s dream adventure, but after he is mauled by a grizzly bear, it’s all about staying alive.

This true-life wilderness survival epic recounts seventeen-year-old Alex Messenger’s near-lethal encounter with a grizzly bear during a canoe trip in the Canadian tundra. The story follows Alex and his five companions as they paddle north through harrowing rapids and stunning terrain. Twenty-nine days into the trip, while out hiking alone, Alex is attacked by a barren-ground grizzly. Left for dead, he wakes to find that his summer adventure has become a struggle to stay alive. Over the next hours and days, Alex and his companions tend his wounds and use their resilience, ingenuity, and dogged perseverance to reach help at a remote village a thousand miles north of the US-Canadian border.

The Twenty-Ninth Day is a coming-of-age story like no other, filled with inspiring subarctic landscapes, thrilling riverine paddling, and a trial by fire of the human spirit.

“The premise of Alex Messenger’s debut The Twenty-Ninth Day is as inviting and cinematic as the precredits movie opening it will certainly be before you or I are much older…The whole thing is told in exactly the same kind of upbeat (Alex survives, obviously), turbo-charged prose that filled, for instance, Aron Ralston’s Between a Rock and a Hard Place…All that’s left is for Stranger Things' Finn Wolfhard to step into the role of Alex and do his best with a CGI bear.” —Open Letters Review
“Almost fifteen years later, Alex Messenger revisits the canoeing expedition that in a matter of minutes turned into a life-changing ordeal. That distance lends honesty and verve to a narrative that steadily builds toward its gripping climax.” —David Roberts, author of Alone on the Ice and Four against the Arctic
“The Twenty-Ninth Day…well done! Alex Messenger is quite a good writer. It felt like I canoed the Barrens and long for a hot bath to soak my wounds.” —Lonnie Dupre, polar explorer and author of Alone at the Top: Climbing Denali in the Dead of Winter
“I will never forget the first time I met Alex and his impressive telling of the bear attack. I was transfixed. I thought if he is that adept and can think so quickly in the face of such extreme danger he would be a great person to work with. I was right. And now with his whole story down in book form, I see his writing is even better than his storytelling! I was transfixed again.” —Jim Brandenburg, award-winning nature photographer, filmmaker, and bestselling author
“The Twenty-Ninth Day is a riveting read. Alex Messenger paints the realities of a multiday backcountry canoe trip, as well as the wild Canadian taiga and tundra, in equally vivid detail. Reminiscent of the Beckey brothers adventures into similar country at a similar age, this book calls us to reconsider what we believe possible of ourselves and our youth. The harrowing encounter with a grizzly bear and subsequent survival decisions take us straight to the heart of both life and adventure.” —Heather “Anish” Anderson, author of Thirst: 2600 Miles to Home
“This riveting true story of thrashing white water, mad bears, big fish, and graphic wilderness triage kept me turning pages well into the night.” —Dean King, New York Times bestselling author of Skeletons on the Zahara
“To put it simply, we were completely swept up in this story of wilderness adventure and survival. Alex Messenger has a knack for immersing the reader in an unforgettable journey in the Canadian tundra. Through his skillful descriptions of the place and interactions of the group, you will experience the stark beauty of the landscape as well as the adrenaline rush of paddling white water as six young men make their way through one of the most remote places on the planet. You will also be right there with him, heart pounding, the moment he comes face-to-face with a barren-ground grizzly.We really enjoyed reading it—and realize how much courage it must have taken to write this and be willing to share such a traumatic story with the world. Great job!” —Amy and Dave Freeman, authors, educators, and 2014 National Geographic Adventurers of the Year
“Messenger is a strong, observational writer, and the subarctic landscape becomes a character of its own.” —Outside
“The Twenty-Ninth Day is the kind of book that requires the reader to set some time aside. Intrigued to find out what happens next, phone calls will go to voicemail and work deadlines will get postponed. His story is a solid addition to the genre of wilderness survival tales.” —Minneapolis Star Tribune
“The tale of six young men on a canoeing expedition in northern Canada—and the bear attack that almost killed one of them…From the beginning, this chronicle of their days afield is populated by original observations…and salutes to a landscape rich with possibilities…A shimmering account both as a travelogue of the deep north and vivid portrayal of a grizzly bear attack.” —Kirkus Reviews
“Over and over, Alex Messenger and his young comrades commit and recommit themselves to the perils of canoeing through the raw, bare landscape of Canada’s far north. And when the worst happens, all of them—Messenger included, despite his wounds—rise to the daunting challenge with wit and skill. The result is one of the most harrowing first-person accounts of wilderness survival I’ve ever come across. It’s also a tribute to youth, good training, inexplicable luck and—when the chips are really down—sheer human courage.” —Catherine Watson, award-winning writer and writing coach 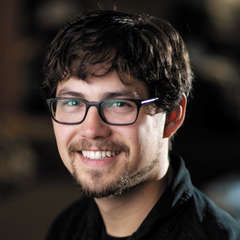 Alex Messenger is a Duluth, Minnesota, author, marketer, and photographer who, at seventeen, was mauled by a grizzly bear. In the decade since, he’s worked as a wilderness guide and volunteer search-and-rescue operator. His love of adventure, nature, and cultures has taken him all over the globe, but the north woods and canoe country have always been among his favorite subjects. His work has appeared in the New York Times, Men’s Journal, National Parks magazine, Outside Online, and Backpacker magazine.