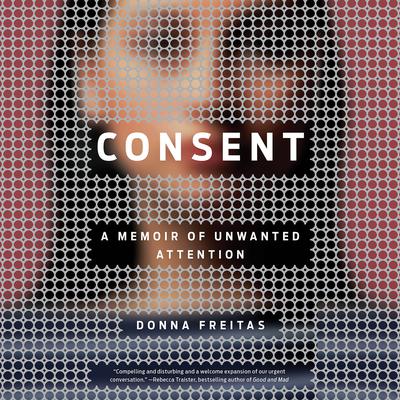 Consent: A Memoir of Unwanted Attention

A powerful memoir about a young woman's toxic relationship with her mentor, an acclaimed professor, whose dark, stalking obsession altered her future forever.


Donna Freitas has lived two lives. In one life, she is a well-published author and respected scholar who has traveled around the country speaking about Title IX, consent, religion, and sex on college campuses. In the other, she is a victim, a woman who suffered and suffers still because she was stalked by her graduate professor for more than two years.

As a doctoral candidate, Freitas loved asking big questions, challenging established theories and sinking her teeth into sacred texts. She felt at home in the library, and safe in the book-lined offices of scholars whom she admired. But during her first year, one particular scholar became obsessed with Freitas' academic enthusiasm. He filled her student mailbox with letters and articles. He lurked on the sidewalk outside her apartment. He called daily and left nagging voicemails. He befriended her mother, and made himself comfortable in her family's home. He wouldn't go away. While his attraction was not overtly sexual, it was undeniably inappropriate, and most importantly--unwanted.

In Consent: A Memoir of Unwanted Attention, Donna Freitas delivers a forensic examination of the years she spent stalked by her professor, and uses her nightmarish experience to examine the ways in which we stigmatize, debate, and attempt to understand consent today.

“Any reader interested in current discussions on consent and its importance should pick up this heartfelt and harrowing book.” —Library Journal (starred review)
“A groundbreaking resource for educators, administrators, students, and survivors, the book explores an issue many would prefer to ignore. A potent memoir of stalking with special resonance in the era of #MeToo.” —Kirkus Reviews (starred review)
“A meticulously recounted memoir of building dread, that pushes our understanding of power and its abuses.” —Rebecca Traister, New York Times bestselling author

Donna Freitas began her career as a competitive gymnast at the age of eight. She regularly medaled on beam and floor at the state level, and she competed at the Annual Regional Championships with her team until an injury led to her retirement at age fifteen. The author of three young adult novels—The Possibility of Sainthood, This Gorgeous Game, and The Survival Kit—and four adult nonfiction books, she lives in Brooklyn.