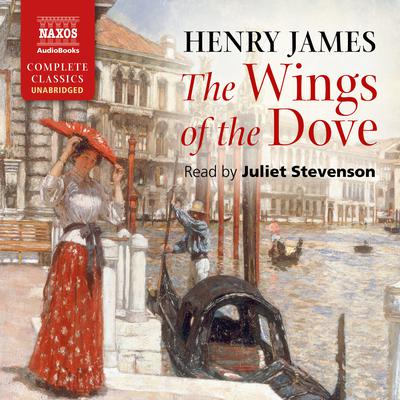 The Wings of the Dove

Milly Theale is a young, beautiful, and fabulously wealthy American. When she arrives in London and meets the equally beautiful but impoverished Kate Croy, they form an intimate friendship. But nothing is as it seems: materialism, romance, self-delusion, and ultimately fatal illness insidiously contaminate the glamorous social whirl.

“The Wings of the Dove represents the pinnacle of James’ prose.” —Louis Auchincloss, #1 New York Times bestselling author
“The melodic quality of Henry James’s prose is even more so as Juliet Stevenson narrates…Stevenson is masterful in guiding the listener through what could be described as cumbersome detail. There is a soft quality to her cadence that comes through in both descriptive detail and dialogue. British and American characters alike sound sensitive and elegant as Stevenson smoothly transitions between their accents. Although the novel itself is somber in tone, Stevenson’s reading enlivens the prose and invites listeners to explore these complex characters.” —AudioFile