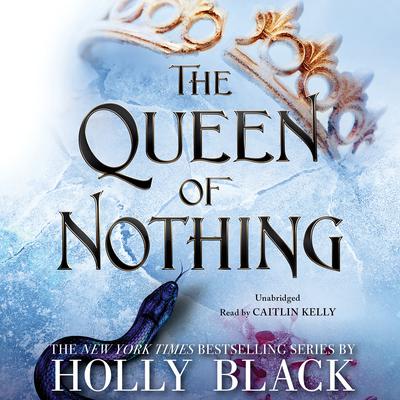 The Queen of Nothing

The Folk of the Air Series: Book 3

An Entertainment Weekly Best Books of the Year and the Decade

A Buzzfeed Best Books of the Year selection for Young Adults

A Bustle Pick for Best Books of the Month

An Epic Reads Pick of the Month's Best Books

From the #1 New York Times bestselling author Holly Black, comes the highly anticipated and jaw-dropping finale to The Folk of the Air trilogy.

Power is much easier to acquire than it is to hold onto. Jude learned this lesson when she released her control over the wicked king, Cardan, in exchange for immeasurable power.

Now as the exiled mortal Queen of Faerie, Jude is powerless and left reeling from Cardan's betrayal. She bides her time determined to reclaim everything he took from her. Opportunity arrives in the form of her deceptive twin sister, Taryn, whose mortal life is in peril.

Jude must risk venturing back into the treacherous Faerie Court, and confront her lingering feelings for Cardan, if she wishes to save her sister. But Elfhame is not as she left it. War is brewing. As Jude slips deep within enemy lines she becomes ensnared in the conflict's bloody politics.

And, when a dormant yet powerful curse is unleashed, panic spreads throughout the land, forcing her to choose between her ambition and her humanity...

"Whether you came for the lore or the love, perfection.” —Kirkus Reviews (starred review)
“Narrator Caitlin Kelly delivers all the fervor of the conclusion to Black’s Folk of the Air trilogy…As the story changes direction, Kelly allows listeners to reconnect with the romance between these two. The political games heat up, and Kelly, likewise, adds to the intensity…ending the series with all the breathtaking drama it deserves. Winner of the AudioFile Earphones Award.” —AudioFile
"[A] dangerous journey filled with mystery, betrayal, intrigue, and romance…Larger-than-life action in a kingdom packed with self-centered, evil, and manipulating characters also doles out real life issues.” —VOYA, starred Review
“A rare second volume that surpasses the first, with, happily, more intrigue and passion still to come.” —Booklist, Starred Review
“Breathtaking set pieces, fully developed supporting characters, and a beguiling, tough-as-nails heroine enhance an intricate, intelligent plot that crescendos to a jaw-dropping third-act twist.” —Publishers Weekly, starred review
“Black sends Jude Duarte…into her most fraught mission yet…Jude was never one to shy away from a challenge, and she has scores to settle, debts to pay, and a crown to claim in Faerie. She may be down, but Jude’s not out; she remains a wily political thinker until the bitter end.” —Booklist (starred review)
“Another fantastic, deeply engaging, and all-consuming work from Black that belongs on all YA shelves. —School Library Journal, starred review