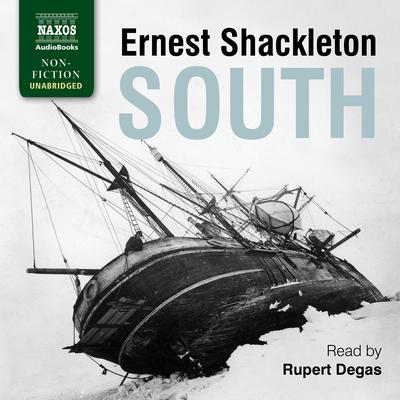 A Booklist Pick of Best Audiobooks of the Month

In 1914, the polar explorer Ernest Shackleton announced an ambitious plan to lead the Imperial Trans-Antarctic Expedition. the first trek across Antarctica from the Atlantic to the Pacific via the South Pole. Shackleton’s third expedition would prove fraught with adventure—and peril.

South is the remarkable tale of that ill-fated expedition as told in Shackleton’s own words. The story begins on the eve of World War I, when the ship Endurance departed from England with Shackleton and his team of six men. The plan was to travel 1,800 miles across the icy continent from the Atlantic side, while a second team aboard the ship Aurora, would reach the Pacific side from Tasmania and lay out supply depots for the advancing team.

As the Endurance approached the continent, however, it faced early ice, and the vessel became hopelessly locked in an ice floe, beginning a series of travails for the men of the Endurance, including ice-covered mountainous islands, harrowing days in a life raft surrounded by hurricane-force winds, braving untested overland routes into the vast unknown, and much more.

Today considered an adventure survival classic, South is the true story of a thrilling polar expedition.

“The tremendous interest aroused once again in Ernest Shackleton’s incredible feat by Lansing’s Endurance has given rise to demand for the reissue of Shackleton’s own account of his venture. As the last man to undertake the approach to the South Pole with dog sleds, this still stands an one of the classics of exploration.” —Kirkus Reviews
"[A] great, and true, adventure story of Antarctic exploration…Narrator Rupert Degas captures the spirit of the man: hearty, plainspoken, determined, and devoted to the welfare of his crew. His stoicism makes the rare moments of deep emotion—for example, when their ship, Endurance, finally slips beneath the ice—even more affecting. While the scientific appendix may be less interesting to some listeners, Degas enhances it with a variety of voices.” —AudioFile

Sir Ernest Shackleton (1874–1922) was an Irish polar explorer who led three British expeditions to the Antarctic in the early twentieth century. He was a junior officer under Robert Falcon Scott during the 1901–1904 expedition to the South Pole. His expedition on the whaler Nimrod in 1907 earned him a knighthood. He detailed his adventures aboard the Endurance during the Imperial Trans-Antarctic Expedition in 1914–1917 in the memoir South.