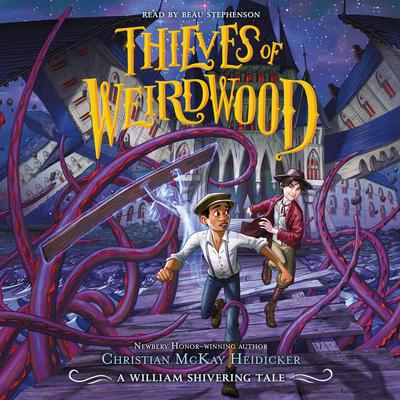 For fans of Brandon Mull and Rick Riordan comes William Shivering and Newbery Honor winner Christian McKay Heidicker's Thieves of Weirdwood, a brand-new illustrated fantasy series about two kid thieves who are plunged into a battle between the Real and Imaginary worlds! Action, laughs, and monsters beyond imagining abound! "Startling, original and epic." —Eoin Colfer, creator of Artemis Fowl Twelve-year-old thieves Arthur and Wally are determined to steal their way up the ranks of the notorious Black Feathers gang. With loan sharks chasing after Arthur’s father and Wally’s brother’s hospital bill due, they’re in need of serious cash. Fast. When Arthur spots some wealthy strangers exiting a seemingly deserted mansion, he smells an opportunity for a big score. Little do the boys realize, they’ve stumbled upon Weirdwood Manor, the headquarters of a magical order who protect the Balance between the Real and Imaginary worlds. When Kingsport is besieged by nightmarish creatures, it’s up to a pair of thieves to save their city. Filled with giant tentacle monsters and heroes literally ripped from the pages of adventure stories, this imagination-bending series is perfect for fans of Keeper of the Lost Cities, Aru Shah, and Nevermoor. A Macmillan Audio production from Henry Holt and Company "An imaginative, page-turning adventure filled with chilling creatures and lovable characters that kept me guessing through every twist and turn." —Shannon Messenger, New York Times bestselling author of Keeper of the Lost Cities

“With dazzling wit, and enough spooky adventure for this and any alternate universe, Thieves of Weirdwood thrills to the last page. Startling, original, and epic.” —Eoin Colfer, New York Times bestselling author
“This series opener is both funny and well paced, and the world-building is fantastic…[The] character development is splendid.” —Kirkus Reviews