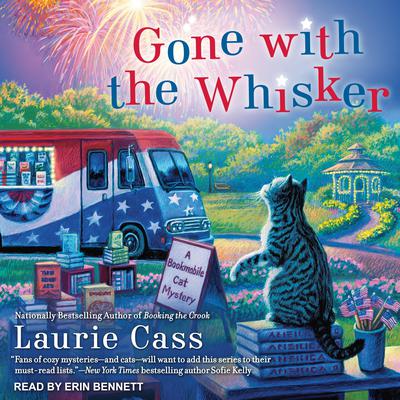 Gone with the Whisker

A friendly feline and a feisty librarian merrily roll along in the newest Bookmobile Cat mystery . . . until murder stops them in their tracks!

It's the summer season in Chilson, Michigan, and the town is packed with tourists ready for a fabulous Fourth of July fireworks show. Minnie Hamilton and her rescue cat, Eddie, have spent a busy day on the bookmobile, delivering good cheer and great reads to even the library's most far-flung patrons. But Minnie is still up for the nighttime festivities, eager to show off her little town to her visiting niece, Katrina.

But then, during the grand finale of the fireworks display, Katrina discovers a body. Minnie recognizes the victim as one of the bookmobile's most loyal patrons. And she knows she—and Eddie—will have to get to the bottom of this purr-fect crime.

Bennett performs at a measured cadence, keeping the suspense unfolding steadily but also allowing listeners to soak in the charming town and its residents. She also voices an endearing portrayal of Eddie, giving him expressive "murrrs" that quickly make him a favorite character. —AudioFile

Laurie Cass grew up in Michigan and graduated from college in the 80’s with a (mostly unused) degree in geology. She turned to writing in the late nineties. After a number of years in management, she felt the need to move on and took a job with fewer responsibilities. A month later, she was dead bored and began to consider writing as a way to wake up her brain. She started reading a lot of books on writing and happened across a particular sentence: “What’s it going to be, reasons or results?”