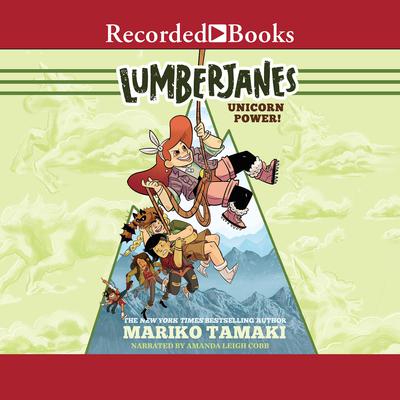 Based on the bestselling, cult-favorite graphic novels, this series of middle-grade novels follows the five campers on totally new, action-packed adventures Welcome to Miss Qiunzella Thiskwin Penniquiqul Thistle Crumpet's Camp for Hardcore Lady Types. The five scouts of Roanoke cabin-Jo, April, Molly, Mal, and Ripley-love their summers at camp. They get to hang out with their best friends, earn Lumberjane scout badges, annoy their no-nonsense counselor Jen . . . and go on supernatural adventures. That last one? A pretty normal occurrence at Miss Qiunzella's, where the woods contain endless mysteries. Today is no exception. When challenge-loving April leads the girls on a hike up the TALLEST mountain they've ever seen, things don't go quite as planned. For one, they didn't expect to trespass into the lands of the ancient Cloud People, and did anyone happen to read those ominous signs some unknown person posted at the bottom of the mountain? Also, unicorns. This hilarious, rollicking adventure series brings the beloved Lumberjanes characters into a novel format with brand-new adventures.

“Narrator Amanda Leigh Cobb nimbly voices a full cast of larger-than-life characters in this exciting story of summer camp and friendship to the max…Cobb excels at creating distinctive voices for all five members of Roanoke Cabin, and even during long dialogue sequences the listener can tell who’s talking. The secondary characters, including exasperated counselor Jen and brash camp director Rosie, are also perfectly pitched. Cobb’s delivery of narrative is particularly excellent, combining deadpan dry wit and a bubbly cartoon style that mimics the graphic novel origins of the Lumberjanes series. Listening to this production is a treat. Winner of the AudioFile Earphones Award.” —AudioFile
“In this clever, funny, and just-creepy-enough collection… friends Jo, Mal, Molly, April, and Ripley are drawn into a world of paranormal goings-on that involves a mysterious lighthouse, a trap-laden underground cave, and a nearby camp for boys…It’s a sharp, smart, and most of all fun celebration of sisterhood that will leave readers eager for the Lumberjanes’ future exploits.” —Publishers Weekly (starred review)
“Without missing a beat, this novelization has successfully sustained the fun, feminist feel, and lively vernacular of the beloved graphic-novel series…With its just-right blend of giggleworthy jokes, LGBTQ–positive characters, and affirmative emphasis on friendship, this middle-grade charmer can make even the coldest, bleakest day feel like a sunny day at summer camp…Awesome to the max!” —Kirkus Reviews (starred review)

Mariko Tamaki is the author of young-adult novels as well as the graphic novels Skim and This One Summer, a Printz Honor and Caldecott Honor Book.