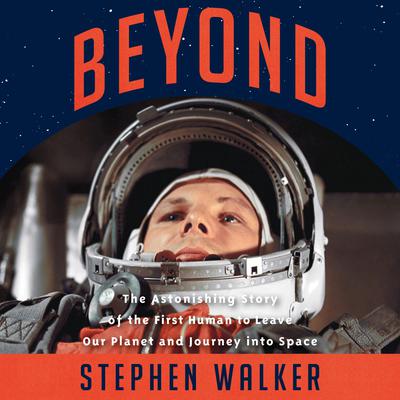 Beyond: The Astonishing Story of the First Human to Leave Our Planet and Journey into Space

“This remarkable account of the 1961 race into space is a thrilling piece of storytelling….It is high definition history: tight, thrilling and beautifully researched.”               (The Times, London, Front Page Lead Review)

“Beyond has the exhilaration of a fine thriller, but it is vividly embedded in the historic tensions of the Cold War, and peopled by men and women brought sympathetically, and sometimes tragically, to life.”—Colin Thubron, author of Shadow of the Silk Road

09.07 am. April 12, 1961. A top secret rocket site in the USSR. A young Russian sits inside a tiny capsule on top of the Soviet Union’s most powerful intercontinental ballistic missile—originally designed to carry a nuclear warhead—and blasts into the skies. His name is Yuri Gagarin. And he is about to make history.

Travelling at almost 18,000 miles per hour—ten times faster than a rifle bullet—Gagarin circles the globe in just 106 minutes. From his windows he sees the earth as nobody has before, crossing a sunset and a sunrise, crossing oceans and continents, witnessing its beauty and its fragility. While his launch begins in total secrecy, within hours of his landing he has become a world celebrity – the first human to leave the planet.

Beyond tells the thrilling story behind that epic flight on its 60th anniversary. It happened at the height of the Cold War as the US and USSR confronted each other across an Iron Curtain. Both superpowers took enormous risks to get a man into space first, the Americans in the full glare of the media, the Soviets under deep cover. Both trained their teams of astronauts to the edges of the endurable. In the end the race between them would come down to the wire.

Drawing on extensive original research and the vivid testimony of eyewitnesses, many of whom have never spoken before, Stephen Walker unpacks secrets that were hidden for decades and takes the reader into the drama of one of humanity’s greatest adventures – to the scientists, engineers and political leaders on both sides, and above all to the American astronauts and their Soviet rivals battling for supremacy in the heavens.

“This remarkable account of the 1961 race into space is a thrilling piece of storytelling…It is high definition history: tight, thrilling, and beautifully researched.”  —The Times (London), front page review
“Told with verve and suspense…A cliffhanger.” —Wall Street Journal
“Scintillating…The thrilling ride to be the first man in space is vividly captured here.” —Financial Times (London)
“A vivid account of the Cold War-era space race…This dramatic…entertaining and carefully researched history achieves liftoff.” —Publishers Weekly
“Dramatic and dynamic. Stephen Walker’s passion for his subject along with his exceptional research and attention to detail have brought my father’s extraordinary journey vividly to life.” —Elena Gagarina, daughter of Yuri Gagarin, the world’s first spaceman
“Beyond has the exhilaration of a fine thriller, but it is vividly embedded in the historic tensions of the Cold War and peopled by men and women brought sympathetically, and sometimes tragically, to life.” —Colin Thubron, author of Shadow of the Silk Road

Stephen Walker is the author of Beyond: The Astonishing Story of the First Human to Leave Our Planet and Journey into Space. His previous book was Shockwave: Countdown to Hiroshima, a New York Times bestseller. As well as being a writer he is also an award-winning documentary director. His films have won an Emmy, a BAFTA, and the Rose d’Or, Europe’s most prestigious documentary award. He was born in London and has a BA degree in history from Oxford and an MA in the history of science from Harvard.