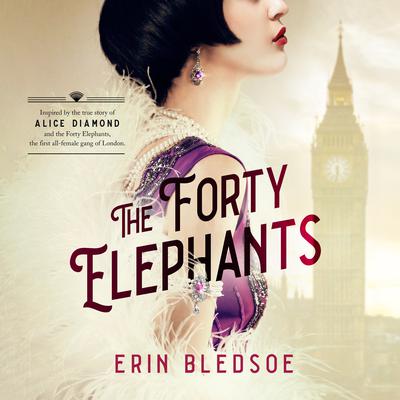 Inspired by the true story of Alice Diamond and the Forty Elephants, the first all-female gang of London.

London in the 1920s is no place for a woman with a mind of her own. Gang wars, violence, and an unforgiving world have left pickpocket Alice Diamond scrambling to survive in the Mint, the gritty neighborhood her family has run for generations. When her father goes to jail yet again and her scam artist brother finds himself in debt to the dangerous McDonald crime syndicate, Alice takes over. Fighting for power at every turn, she struggles to protect her father’s territory and keep the people she loves safe from some of London’s most dangerous criminals.

Recruited by the enigmatic Mary Carr, Alice boldly chooses to break her father’s edict against gangs and become part of a group of notorious lady shoplifters, the Forty Elephants. Leaving the Mint behind, she and the other girls steal from the area’s poshest department stores, and for the first time in her life, Alice Diamond tastes success. But it’s not long before she wants more—no matter the cost. And when her past and present collide, there’s no escaping the girl from the Mint.

“Forget the gangster and his moll; in the world of The Forty Elephants, it’s the women wielding the weapons and the power. Erin Bledsoe brings the gritty underworld of 1920s London to life with the true story of Alice Diamond and her band of female thieves, showing the triumphs and the tolls of a life of crime. If you ever wished Boardwalk Empire had stronger women—and British accents—this is the book for you!” —Lauren Willig, New York Times bestselling author of the Pink Carnation series
“From the underworld of London to high-stakes heists in the city’s most glamorous shops, Erin Bledsoe weaves a mesmerizing spell of a novel around women in the 1920s taking back their power, with style and verve. You’ll fall head over heels with her tale of theft, hope, revenge, and daring, and with her ladies of the Forty Elephants.” —C. W. Gortner, bestselling author of The Last Queen and Mademoiselle Chanel
“So compulsively readable, the pages seem to whizz past by themselves.” —Kate Forsyth, award-winning author of Bitter Greens and The Crimson Thread
“A gritty exploration of the story behind one of England’s most infamous gangs and its leader, Alice Diamond. The Forty Elephants were clever, successful, and all-female—a ring of thieves so polished they appeared unstoppable. Bledsoe’s debut novel brims with verve, bringing to life the intricate cobweb of criminal relationships comprising London’s 1920s underbelly, deftly taking the reader along on Alice’s harrowing, and ultimately triumphant, journey to the top.” —Shana Abé, New York Times bestselling author of The Second Mrs. Astor
“[An] impressive debut…Fans of intelligent historical fiction will be eager to see what Bledsoe does next.” —Publishers Weekly
“Alice is a protagonist with her fair share of vices, but readers will find themselves rooting for her from the edge of their seats, waiting to see if she and her friends can pull off their biggest job yet.” —Booklist
“On the very first page, I was transported to the gritty and dangerous streets of 1920s London. Fierce protector of her family and her turf, Alice Diamond is one tough broad, made even more intimidating when she joins forces with a band of female pickpockets. Fans of first-rate historical fiction will love this book.” —Renée Rosen, USA Today bestselling author of The Social Graces
“The Forty Elephants is a dazzling read from start to finish. Despite her hard edges, Alice Diamond is an unforgettable heroine you can’t help but love. Full of unexpected twists and turns, her story will not only delight and surprise you but touch your heart as well. Bledsoe delivers with this rich and daring debut!” —Amanda Skenandore, award-winning author of Between the Earth and Sky
“Get ready for a ride! The Forty Elephants is a riveting page-turner; I was hooked from page one. Bledsoe’s dialogue shimmers, and her description of 1920s London is spot-on. Swiftly paced with an unique plot, this book was unputdownable. Highly recommended!” —Michelle Cox, author of the Henrietta and Inspector Howard series
“If you have a weakness for lawless female characters, as I do, then this is the book for you. The Forty Elephants was my first beach read of the season, and I got a sunburn because I was so engrossed…The book is written in a terse, hard-boiled style that suits the story perfectly. The tension is nonstop, and, while you might not want to have Alice over to your house for tea, you would surely want her at your side in a battle.” —Historical Novels Review

Erin Bledsoe was told in sixth grade that her essay on Marie Antoinette showed promise, fueling her dream to write about historical women. When she’s not writing, she’s exploring nature, collecting journals, or rolling dice at a table with friends playing Dungeons & Dragons. She lives with her husband and children in Michigan.