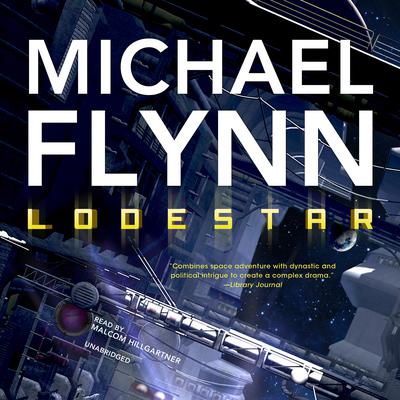 In the early years of the twenty-first century, humanity has progressed into space, having established a permanent presence with Earth-orbiting Leo Station. Science and commerce in space are booming, and humanity's future looks bright. But one man's desire for vindication and revenge could end it all.

Lodestar chronicles the complex political, personal, and scientific conflicts on Earth and in orbit—conflicts that must be resolved if humanity is to claim its destiny among the stars.

“Flynn’s fans will enjoy this well-crafted outing and can rest assured that the story’s big questions (Who is lobbing these rocks at Earth? And why?) leave plenty of room for a sequel.” —Publishers Weekly
“Flynn’s multivolume saga of near-future global peril combines space adventure with dynastic and political intrigue to create a complex drama with a large cast of characters and a too-plausible premise. Along with its precursors, Rogue Star and Firestar, this volume belongs in most SF collections.” —Library Journal
“Flynn’s is a good series.” —Booklist
“Lodestar stands on its own. No knowledge of the earlier works, Firestar and Rogue Star, is required to enjoy this new entry in the series.” —BookPage

Michael Flynn lives in Easton, Pennsylvania. He is the winner of the Robert A. Heinlein Award and was a Hugo nominee for Eifelheim.