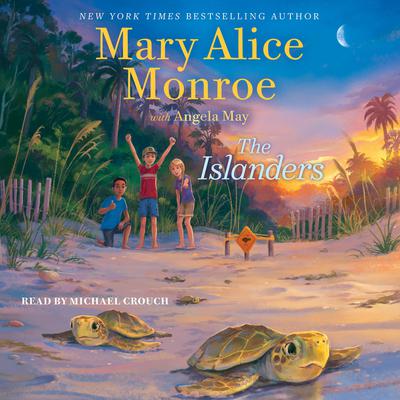 By Mary Alice Monroe , with Angela May
Read by Michael Crouch

From New York Times bestselling author Mary Alice Monroe comes a beautiful story of friendship, loss, and the healing power of nature in her first book for middle grade readers.

Eleven-year-old Jake’s life has just turned upside-down. His father was wounded in Afghanistan, and his mother is going to leave to care for him. That means Jake’s spending the summer on tiny Dewees Island with his grandmother. The island is a nature sanctuary—no cars or paved roads, no stores or restaurants. To make matters worse, Jake’s grandmother doesn’t believe in cable or the internet. Which means Jake has no cell phone, no video games...and no friends. This is going to be the worst summer ever!

He’s barely on the island before he befriends two other kids—Macon, another “summer kid,” and Lovie, know-it-all who lives there and shows both Jake and Macon the ropes of life on the island. All three are struggling with their own family issues and they quickly bond, going on adventures all over Dewees Island. Until one misadventure on an abandoned boat leads to community service. Their punishment? Mandatory duty on the Island Turtle Team. The kids must do a daily dawn patrol of the beach on the hunt for loggerhead sea turtle tracks. When a turtle nest is threatened by coyotes, the three friends must find a way to protect it. Can they save the turtle nest from predators? Can Jake’s growing love for the island and its inhabitants (be they two-legged, four-legged, feathered, or finned) help to heal his father?

Mary Alice Monroe is the author of nearly two dozen novels, several nonfiction titles, and award-winning children’s books. Her body of work reflects her commitment to the natural world through literature. She has served on the faculty of numerous writer’s conferences and retreats and is a featured speaker at events, both literary and conservation. Her books have achieved several bestseller lists, including the New York Times, SIBA, and USA Today, and are sold worldwide. She has been awarded the SC Center for the Book Award for Fiction, the International Book Award for Green Fiction, the Career Achievement Award for mainstream fiction by RT Book Reviews, and the South Carolina Book Festival Literary Excellence Award.