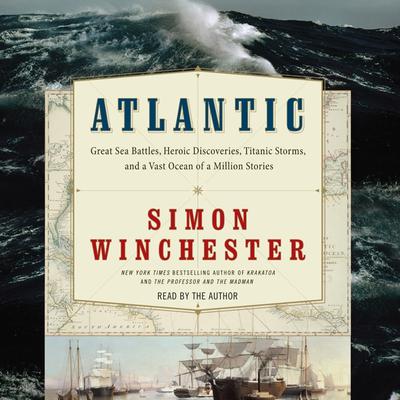 Blending history and anecdote, geography and reminiscence, science and exposition, New York Times bestselling author Simon Winchester tells the breathtaking saga of the Atlantic Ocean. A gifted storyteller and consummate historian, Winchester sets the great blue sea's epic narrative against the backdrop of mankind's intellectual evolution, telling not only the story of an ocean, but the story of civilization. Fans of Winchester's Krakatoa, The Man Who Loved China, and The Professor and the Madman will love this masterful, penetrating, and resonant tale of humanity finding its way across the ocean of history.

“History is rarely as charming and entertaining as when it’s told by Simon Winchester. There are fabulous set pieces in Atlantic—on piracy, on packet ships, on trans-Atlantic cables and the speeding up of information, on codfish, on sea bass, on plankton.” —New York Times Book Review
“Simon Winchester is one of those maddeningly gifted British writers who could probably write the history of mud and make it fascinating. In fact, he sort of did…A rollicking ride…No one tells a better yarn than Winchester.” —Washington Post
“A formidable writer and storyteller.” —Entertainment Weekly
“Winchester vividly describes how the Atlantic Ocean was born about 190 million years ago, continues to spread at the rate of about an inch a year, and could well disappear as we know it in just another 180 million years…Delightful.” —USA Today
“Convincing…A fascinating look at a long sweep of history.” —Los Angeles Times
“Mr. Winchester—a trained geologist and inveterate globetrotter—is well suited to tell the story. And he tells it with the sort of panache that he has brought to previous books…His lively, lyrical telling of the ocean’s story does much to sharpen our appreciation.” —Wall Street Journal
“Inspired.” —San Francisco Chronicle
“Interesting and informative…Mr. Winchester’s yarns are not just sea stories; they are documented adventures…delightful…a fantastic yarn.” —Washington Times
“Fascinating…Simon Winchester’s storytelling abilities shine, with personal anecdote and research expertly woven.” —Guardian (London)
“Refreshing…a work of ‘high specific gravity’ and an outstanding example of popular historical scholarship.” —Times Literary Supplement (London)
“Wonderful, encyclopedic…enthralling…Winchester brings us down to sea level and makes us realize what we owe to the Atlantic.” —Telegraph (London)
“Atlantic...is at once satisying, suspenseful (no mean trick on the subject of an ocean), thought-provoking, occasionally funny, and always absorbing. So big a subject as the Atlantic Ocean requires a certain largeness of spirit, and amplitude of descriptive power, and Simon Winchester is gloriously up to the task.” —Daily Beast
“Telling the story of ‘the classic ocean of our imaginings’ is a huge undertaking, but Simon Winchester manages it with aplomb.” —Economist
“Mr. Winchester’s latest work of nonfiction is, like the thirty-six-pound cod my father caught forty years ago in the deep sea two hours out of Plymouth, Mass., ‘a keepuh’ (New England parlance)…It’s one of those you’d like to keep on a shelf for another read some time in the future.” —Baltimore Sun
“Few writers working today can tackle such broad, sprawling—and at times overwhelming—material as Simon Winchester and deliver it with such skill, verve, and grace…Epic…Winchester is a master craftsman, and Atlantic is well worth the effort…deftly executed, audacious.” —Miami Herald
“[An] epic new book…With his excellent research and engrossing anecdotes about the ocean as a ‘living thing,’ Winchester spotlights its inspiration on poets, painters, and writers in its majestic beauty…Winchester’s sea saga is necessary reading for those who want to understand the planet better.” —Publishers Weekly
“Of all of Winchester’s amazingly educational and entertaining books…his latest one is perhaps the most unique and the most creative in its approach…As we learn from one of the most wondrous facts presented here, oceans actually do have life spans…Lively and extensive…Winchester’s latest is bound to follow his previous books onto bestseller lists, and this one should be promoted as one of his best.” —Booklist
“[A] tale about the Atlantic Ocean that is variably genial, cautionary, lyrical, admonitory, terrifying, horrifying, and inspiring…A lifetime of thought, travel, reading, imagination, and memory inform this affecting account.” —Kirkus Reviews (starred review)

Simon Winchester is the acclaimed author of many books, including The Professor and the Madman, The Man Who Loved China, A Crack in the Edge of the World, and Krakatoa—all of which were New York Times bestsellers and appeared on numerous best and notable lists. In 2006 he was made an officer of the Order of the British Empire by her Majesty the Queen.