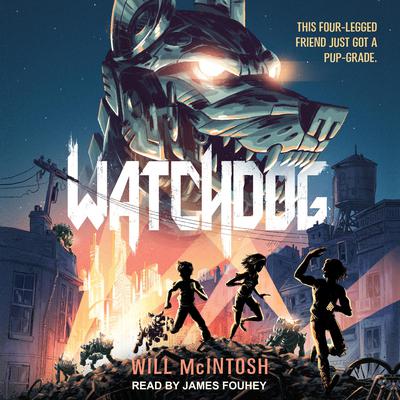 By Will McIntosh
Read by James Fouhey

Thirteen-year-old twins Vick and Tara have built an incredible machine—a loyal robotic watchdog named Daisy. But, when local crime boss Ms. Alba schemes to add Daisy to her robot army, Vick and Tara must go to great lengths to protect their prized pet. Because Daisy is more than just any robot—she's their constant protector, and together the three make a great team.

Vick and Tara are determined to stop the mob from tearing their little family apart. And they might just succeed! Sure, the evil Ms. Alba has more robot watchdogs, but none are as smart—or as faithful—as their Daisy. Plus, if things get too dangerous, Tara could always upgrade their pet. With her mechanical skills, she could make Daisy bigger, stronger, and a lot more intimidating!

I enjoyed the narration by James Fouhey, who read Watchdog in expressive and animated tones that were perfect for the audiobook. It was an enjoyable listen. —Bibliosanctum