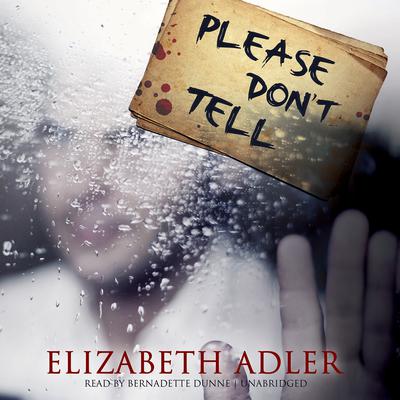 Fen Dexter's quiet life on the idyllic California coast is interrupted one stormy night when a blood-covered man shows up on her doorstep claiming to have had a car accident. He tells her that he is on his way to San Francisco to help the police solve the murder of his fianc├®e. Unable to make it to the hospital because of the storm, he spends the night at Fen's, and the attraction between them is obvious. The next morning he heads to the hospital where Fen's niece, Vivi, is an ER doctor. Vivi is treating the most recent target of a serial killer whose signature move is to leave a note saying "Please Don't Tell" taped across his victims' mouths. When Fen's mysterious stranger comes to Vivi to have his wounds stitched, she agrees to set him up to talk with the police about his fianc├®e.

Who is this man, really? What does he want with Fen and her family? And will they live long enough to uncover the truth? Told with Elizabeth Adler's knack for terrific female characters and breathtaking twists, Please Don't Tell will keep you guessing, right up to the end.

“If anyone can combine romance with a creepy CSI-style serial-killer plot, it’s Adler.” —Booklist
“[A] page turner…[with a] white-knuckle climax.” —Publishers Weekly

Elizabeth Adler is the internationally acclaimed author of more than thirty novels. She is a frequent world traveler who has lived in Brazil, the United States, England, France, and Ireland, and she uses these real locations in her books. She is married with one daughter and lives in Palm Springs, California.