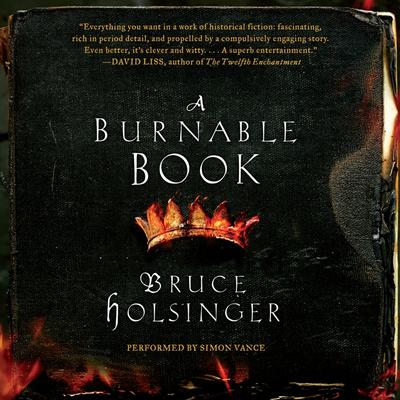 A Burnable Book: A Novel

In Chaucer's London, betrayal, murder, royal intrigue, mystery, and dangerous politics swirl around the existence of a prophetic book that foretells the deaths of England's kings. Bruce Holsinger's A Burnable Book is an irresistible historical thriller reminiscent of the classics An Instance of the Fingerpost, The Name of the Rose, and The Crimson Petal and the White.

London, 1385. Surrounded by ruthless courtiers—including his powerful uncle, John of Gaunt, and Gaunt's artful mistress, Katherine Swynford—England's young, still untested king, Richard II, is in mortal peril, and the danger is only beginning. Songs are heard across London—catchy verses said to originate from an ancient book that prophesies the end of England's kings—and among the book's predictions is Richard's assassination.

Only a few powerful men know that the cryptic lines derive from a "burnable book," a seditious work that threatens the stability of the realm. To find the manuscript, wily bureaucrat Geoffrey Chaucer turns to fellow poet John Gower, a professional trader in information with connections high and low. Gower discovers that the book and incriminating evidence about its author have fallen into the unwitting hands of innocents, who will be drawn into a labyrinthine conspiracy that reaches from the king's court to London's slums and stews—and potentially implicates his own son. As the intrigue deepens, it becomes clear that Gower, a man with secrets of his own, may be the last hope to save a king from a terrible fate.

Medieval scholar Bruce Holsinger draws on his vast knowledge of the period to add colorful, authentic detail—on everything from poetry and bookbinding to court intrigues and brothels—to this highly entertaining and brilliantly constructed epic literary mystery that brings medieval England gloriously to life.

“Fascinating, rich in period detail, and propelled by a compulsively engaging story. Even better, it’s clever and witty…Superb entertainment.” —David Liss, New York Times bestselling author
“[Holsinger’s] evocation of fourteenth-century London is the best thing in the book…Holsinger’s research, alongside the energetic vulgarity of a language in flux, delivers up a world where even the filth is colorful.” —New York Times Book Review
“Holsinger is a graceful guide to the fourteenth century, lacing his thriller with just the right seasoning of antique words and all the necessary historical detail without any of the fusty smell of a documentary.” —Washington Post
“A Burnable Book is fragrant with the stench of medieval London…The central mystery of the book leads us through the mucky lanes of London, with cunning surprises around every corner…[A] jam-packed tapestry of medieval England.” —NPR
“Medievalist Holsinger delivers a first novel whose zest, breadth, and color evoke The Canterbury Tales…The intricate plot, sharp characterizations, and sweeping depiction of medieval England make this a memorable fiction debut.” —Publishers Weekly (starred review)
“Medieval England never tasted so rich nor smelled so foul as in this descriptive and intricately layered mystery. Holsinger is at his best describing the everyday lives and privations of the lower classes. He succeeds in elevating the missing manuscript genre to new heights that will entertain readers of both fiction and nonfiction.” —Library Journal (starred review)
“With a treasure trove of historical details…there is plenty of court intrigue, but the commoners and women of the street steal the show with their resourcefulness and determination.” —RT Book Reviews (4 stars)
“A fascinating overview of pre-Renaissance London at its best and worst. A highly literate thriller.” —Kirkus Reviews
“Narrator Simon Vance gives a mesmerizing performance of Holsinger’s intriguing story…The book itself is chock-full of fascinating details that make the history and the setting come vividly to life. That vibrancy is enhanced by the variety of voices Vance employs and the specificity and diversity of moods he’s able to create with his vocal expressions. Fans of historical mysteries won’t want to miss this blend of great story and great narration.” —AudioFile

Bruce Holsinger is a prolific and award-winning scholar of the medieval period who teaches at the University of Virginia. His books on medieval culture have won prizes from the Modern Language Association, the Medieval Academy of America, and other scholarly organizations. He is a Guggenheim Fellow and a recipient of research fellowships from the American Council of Learned Societies and the National Endowment for the Humanities.