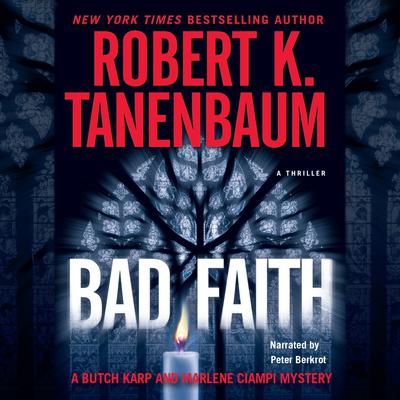 New York District Attorney Butch Karp has no qualms about putting David and Nonie Ellis on trial following the excruciating death of their young son, Micah. To him, the case is cut-and-dried—reckless manslaughter. Helpless ten-year-old Micah counted on his parents to protect him from the effects of a rare but treatable cancer. Instead, the Ellis family relied solely on prayer and the guidance of snake-oil salesman Reverend C. G. Westlund, of the End of Days Reformation Church of Jesus Christ Resurrected, to save him.

Westlund and his zealous followers set up camp outside the DA's office, angrily protesting the indictment of their "brother" and "sister," but the charismatic leader's true objective is to create a diversion from an alarming fraud. He coerced Nonie Ellis into signing an insurance policy that listed himself and the church as beneficiaries in the event of Micah's death, but he needs the Ellises to be exonerated to get the payout. When David Ellis discovers the deception, no amount of faith can save him from his gruesome fate.

Amid the firestorm of controversy surrounding the case, Karp's wife, private investigator Marlene Ciampi, heads to Memphis to uncover Westlund's past. The evidence she finds is enough to blow the top off the con man's scheme—if she doesn't get herself blown away in the process. Back in Manhattan, meanwhile, Karp is confronted by a deadly nemesis from the past who has explosive plans of her own. The edge-of-your-seat action comes to a head at the annual Halloween parade when a merciless struggle between good and evil metes out its own fatal form of justice.

“Bad Faith is Robert Tanenbaum’s best thriller ever. The cutting-edge legal issues—religion colliding head-on with medical ethics—spiked with a stunning assassin involved in an international terrorists threat, are a deadly mix from on of my favorite authors. Fans clamoring for more Butch Karp will find him at the top of his game.” —Linda Fairstein, New York Times bestselling author of Night Watch
“Butch Karp is the best fictional prosecuting attorney in literature…Tanenbaum is a phenomenal attorney and a remarkable storyteller.” —Mark Lane, New York Times bestselling author, praise for the author
“An action-packed, in-your-face-thriller.” —Mystery Gazette