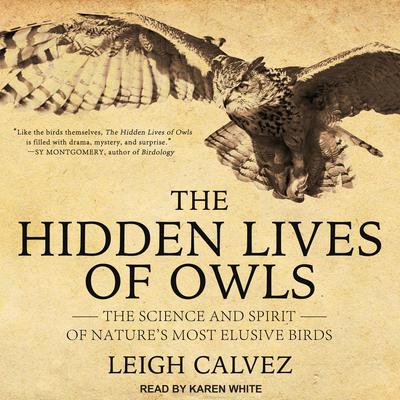 The Hidden Lives of Owls: The Science and Spirit of Nature's Most Elusive Birds

In this New York Times bestseller, a naturalist probes the forest to comprehend the secret lives of owls. Leigh Calvez takes listeners on an adventure into the world of owls: owl-watching, avian science, and the deep forest—often in the dead of night. These birds are a bit mysterious, and that's part of what makes them so fascinating. Calvez makes the science entertaining and accessible while exploring the questions about the human-animal connection, owl obsession, habitat, owl calls, social behavior, and mythology.

Calvez writes with feeling and is obviously in awe of these mysterious creatures. —Library Journal

Leigh Calvez has worked with whales and dolphins as a scientist, naturalist and nature writer. As a scientist, she worked as Research Director for the Ocean Mammal Institute on such projects as the effect of vessel traffic on endangered humpback whales off Maui, Hawaii and the effects of human interaction on the Hawaiian Spinner Dolphin in their resting bays on the Big Island of Hawaii. She also led the only independent research team observing the US Navy’s testing of Low Frequency Active Sonar (LFA) on humpback whales in their nurseries in Hawaii in 1998. As a naturalist, Leigh has worked on whale watch boats in Massachusetts watching humpback and finback whales on the feeding grounds of Stellwagen Bank, in Hawaii on the breeding grounds of the humpback whale and in the San Juan Islands of Washington State, watching pods of orca whales. She has also led extended whale watching journeys to New Zealand, British Columbia and the Azores Islands off Portugal.