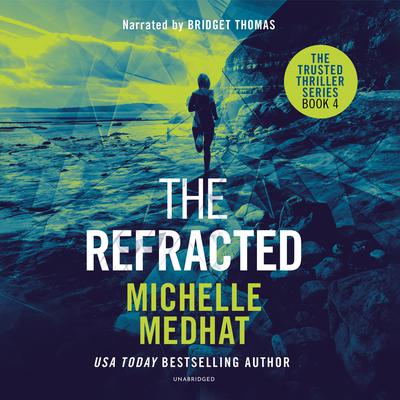 She’s now a fully fledged Protector. But her formidable extra-terrestrial powers may not be enough to save humanity from itself.

Ellie Noor longs for an end to the constant fighting on Earth. Now fully alien and nearly invincible, she and her superhuman husband are busy stamping out terrorist armies worldwide. But her heart breaks when a new global alliance for peace makes its first initiative a mass execution of its enemies.

Suspicious of the motives of the movement’s creator, UK Prime Minister Ashton, Ellie’s search for answers only leads to startling revelations. And her former-MI6-spy husband isn’t helping matters by kowtowing to the British leader. With political havoc and cosmic dangers threatening, one wrong move could spell disaster for millions …

Can Ellie balance the forces at play before humankind is wiped off the interstellar map?

The Refracted is the fourth book in the fast-moving Trusted Thriller series. A series where Bond meets The X-Files. A heart-pumping fusion of ruthless, political spy thriller with thought-provoking sci-fi. Fans of Dean Koontz, Sam Bourne, Dan Brown, Robert Ludlum, Ian Fleming, and A G Riddle will devour this book in one sitting. If you like mind-blowing suspense, ancient alien powers, and espionage intrigue, then you’ll love this exhilarating adventure.