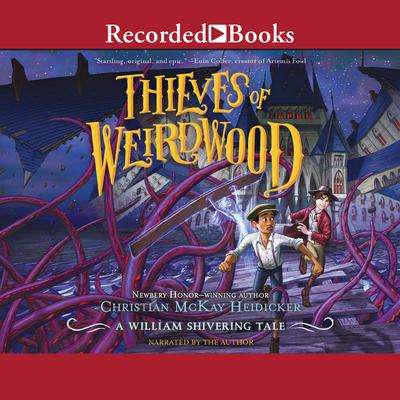 Twelve-year-old thieves Arthur and Wally are determined to steal their way up the ranks of the notorious Black Feathers gang. With loan sharks chasing after Arthur’s father and Wally’s brother’s hospital bill due, they’re in need of serious cash. Fast.

When Arthur spots some wealthy strangers exiting a seemingly deserted mansion, he smells an opportunity for a big score. Little do the boys realize, they’ve stumbled upon Weirdwood Manor, the headquarters of a magical order who protect the Balance between the Real and Imaginary worlds. When Kingsport is besieged by nightmarish creatures, it’s up to these young thieves to save their city.

Filled with giant tentacle monsters and heroes literally ripped from the pages of adventure stories, this imagination-bending series is perfect for fans of The Five Kingdoms, Aru Shah, and Nevermoor.