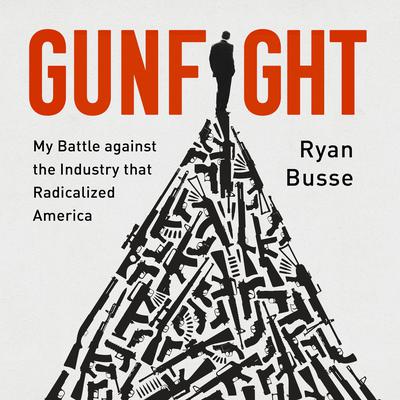 Gunfight: My Battle Against the Industry that Radicalized America

A former firearms executive pulls back the curtain on America’s multibillion-dollar gun industry, exposing how it fostered extremism and racism, radicalizing the nation and bringing cultural division to a boiling point.

As an avid hunter, outdoorsman, and conservationist—all things that the firearms industry was built on—Ryan Busse chased a childhood dream and built a successful career selling millions of firearms for one of America’s most popular gun companies.

But blinded by the promise of massive profits, the gun industry abandoned its self-imposed decency in favor of hardline conservatism and McCarthyesque internal policing, sowing irreparable division in our politics and society. That drove Busse to do something few other gun executives have done: he’s ending his thirty-year career in the industry to show us how and why we got here.

Gunfight is an insider’s call-out of a wild, secretive, and critically important industry. It shows us how America’s gun industry shifted from prioritizing safety and ethics to one that is addicted to fear, conspiracy, intolerance, and secrecy. It recounts Busse’s personal transformation and shows how authoritarianism spreads in the guise of freedom, how voicing one’s conscience becomes an act of treason in a culture that demands sameness and loyalty. Gunfight offers a valuable perspective as the nation struggles to choose between armed violence or healing.

“A fascinating, clear-eyed account… with a sense of hope that there is a path forward.” —Gabby Giffords, former congresswoman and New York Times bestselling author
“A riveting account of what drives this belligerent force, and insights into how to temper it.” —Dave Cullen, New York Times bestselling author
“This is an incisive look at how and why one of America’s deepest partisan divides got that way.” —Publishers Weekly
“This is a must-read book for anyone who wants to understand how a wholesome part of America was twisted to radicalize wide swaths of our country, and its all wrapped up in a wild-ride story that you can’t put down.” —Steve Bullock, two-term Montana governor
“A riveting account…But gun owners like Ryan Busse are taking back the narrative from extremists who are trying to use guns to undermine our democracy.” —Shannon Watts, founder of Moms Demand Action

Ryan Busse is a former firearms executive who helped build one of the world’s most iconic gun companies, and was nominated multiple times by industry colleagues for the prestigious Shooting Industry Person of The Year Award. Busse is an environmental advocate who served in many leadership roles for conservation organizations, including as an advisor for the United States Senate Sportsmen’s Caucus and the Biden Presidential Campaign. These days, Ryan provides consulting services to progressive organizations with the aim to undo the country’s dangerous radicalization. He remains a proud outdoorsman, gun owner, father, and resident of Montana.