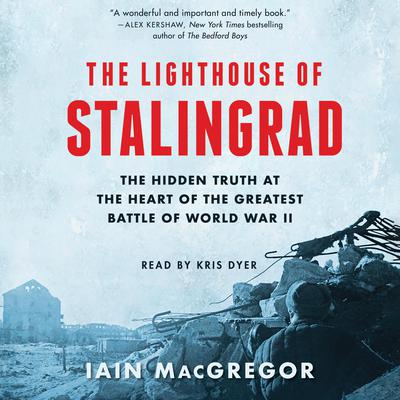 The Lighthouse of Stalingrad: The Epic Siege at the Heart of the Greatest Battle of World War II

A thrilling, vivid, and highly detailed account of the epic siege during one of World War II’s most important battles, told by the brilliant British editor-turned-historian and author of Checkpoint Charlie, Iain MacGregor.

September, 1942: The Battle for Stalingrad was one of the most decisive in the Second World War—indeed, in any war in history. With over two million combatants killed, wounded, or captured, it was also the bloodiest in a terrible landscape of suffering: Twenty-seven million Russians—including sixteen million civilians—lost their lives in the war.

Elite German and Russian troops battled for control of Stalingrad in brutal house-to-house fighting. This deadly, high-stakes struggle centered on the fight to hold a key strategic building (codenamed: “The Lighthouse”) a few hundred meters from the River Volga. Right on the frontline, a small band of Soviet soldiers held up an entire German division with armored support, for over one hundred days. The epic fight swung the tide of battle until the Red Army would surround and then destroy Hitler’s 6th Army—the same army that had conquered Poland, France, Yugoslavia, and Greece. This dramatic story unfolded in a city reduced to rubble, its inhabitants starving in cellars during the harshest of Russian winters.

The men who fought and died to hold this building became national heroes, lauded by the Soviet news reports of the time, but the actual events were never revealed—until now. Drawing on newly discovered firsthand testimonies on both sides, as well as a revelatory unpublished memoir of a German commander, The Lighthouse of Stalingrad sheds new light on the pivotal episode in WWII that established Soviet supremacy and thus guaranteed Hitler’s defeat in the ruins of Berlin two years later.

Filled with thrilling military action as well as a lively cast of characters, MacGregor’s meticulously researched work brings this battle to life as never before, making The Lighthouse of Stalingrad a new classic for World War II and history buffs everywhere.

“The Lighthouse of Stalingrad is the finest of military history, utterly riveting, based on revelatory and superb research, and a heart-rending account of arguably the most impactful battle to defeat Nazism in WWII. A wonderful and important and timely book.” —Alexander Kershaw, New York Times bestselling author