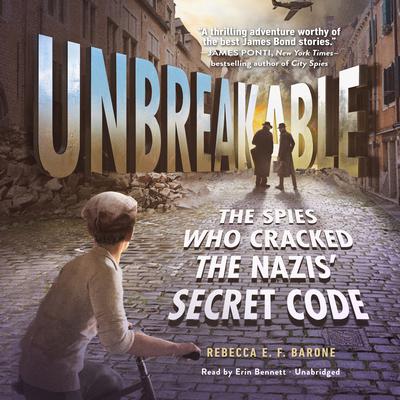 Unbreakable: The Spies Who Cracked the Nazis' Secret Code

The edge-of-your seat true story of the codebreakers, spies, and navy men who cracked the Nazis’ infamous Enigma encryption machine and turned the tide of World War II―perfect for fans of The Imitation Game.

As the Germans waged a brutal war across Europe, details of every Nazi plan, every attack, every troop movement were sent over radio. But to the Allied troops listening in―and they were always listening―the crucial messages sounded like gibberish. The communications were encoded with a powerful cipher, making all information utterly inaccessible … unless you could unlock the key to the secret code behind the German’s powerful Enigma machine.

Unbreakable tells the true story of one of the most dangerous war-time codebreaking efforts ever. While Hitler marched his troops across newly conquered lands and deadly “wolfpacks” of German U-Boats prowled the open seas, a team of codebreakers, spies, and navy men raced against the clock to uncover the secrets that hid German messages in plain sight. Victory―or defeat―in World War II would hinge on their desperate attempts to crack the code.

Unbreakable is a groundbreaking work of narrative nonfiction from the author of Race to the Bottom of the Earth (recipient of four starred reviews)―perfect for fans of Bomb, The Boys Who Challenged Hitler, and The Nazi Hunters.

Rebecca E. F. Barone holds a bachelor of arts in English from Bucknell University as well as a degree in mechanical engineering. Her technical projects include the development of crash test dummies, and her short-form STEM writing has been published in the award-winning Muse magazine. As a recipient of a National Science Foundation PAGES scholarship, she has served underrepresented populations through mentorship and has continued to mentor in the kidlit arena with her participation in the #kidsneedmentors program. She enjoys rock climbing, marathon running, and creating amazing (sometimes tasty!) messes with her husband, son, and daughter.