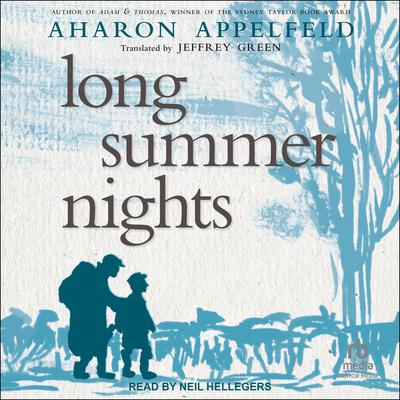 The second and last children's book by the extraordinary Holocaust survivor and Hebrew-language author of the award-winning Adam & Thomas.

A mystical and transcendent journey of two wanderers, an eleven-year-old boy and an old man to whom the boy has been entrusted by his father, a Jew, fleeing the ravages of the war by the late award winning author, Aharon Appelfeld. The old man is a former Ukrainian commander, revered by the soldiers under his command, who has gone blind and chosen the life of a wanderer as his last spiritual adventure. The child, now disguised as a Ukrainian non-Jew, learns from the old man how to fend for himself and how to care for others. In the tradition of The Alchemist, the travelers learn from each other and the boy grows stronger and wiser as the old man teaches him the art of survival and, through the stories he shares, the reasons for living. Long Summer Nights carries its magic not only in the words, but also in the silences between them.

Aharon Appelfeld (1932–2018) wrote more than forty works of fiction and nonfiction, including The Iron Tracks and Until the Dawn’s Light, both winners of the National Jewish Book Award. His book The Story of a Life won the Prix Médicis Étranger, and Adam & Thomas won the Sydney Taylor Book Award and was a finalist for the 2016 National Jewish Book Award. His other honors include the Giovanni Boccaccio Literary Prize, Nelly Sachs Prize, Israel Prize, Bialik Prize, the MLA Commonwealth Award, and the London Independent Foreign Fiction Prize. He was a member of the American Academy of Arts and Sciences and received honorary degrees from the Jewish Theological Seminary, Hebrew Union College–Jewish Institute of Religion, and Yeshiva University.