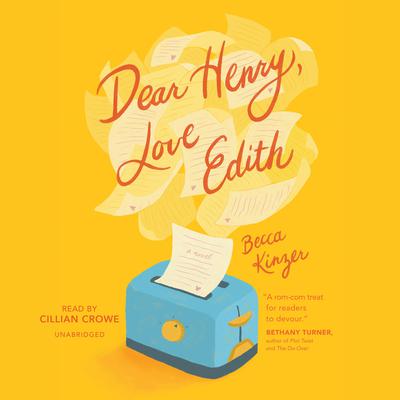 He thinks she’s an elderly widow. She’s convinced he’s a grumpy old man. Neither could be further from the truth.

After a short and difficult marriage, recently widowed Edith Sherman has learned her lesson. Forget love. Forget marriage. She plans to fill her thirties with adventure. As she awaits the final paperwork for a humanitarian trip to South Africa, she accepts a short-term nursing position in a small Midwestern town. The last thing she needs is a handsome local catching her eye. How inconvenient is that?

Henry Hobbes isn’t exactly thrilled to have Edith, who he assumes is an elderly widow, dumped on him as a houseguest for the summer. But he’d do almost anything for his niece, who is practically like a sister to him given how close they are in age. Especially since Edith will be working nights and Henry works most days. When he and Edith keep missing each other in person, they begin exchanging notes―short messages at first, then longer letters, sharing increasingly personal parts of their lives.

By the time Henry realizes his mistake―that Edith is actually the brown-eyed beauty he keeps bumping into around town―their hearts are so intertwined he hopes they never unravel. But with her departure date rapidly approaching, and Henry’s roots firmly planted at home, Edith must ultimately decide if the adventure of her dreams is the one right in front of her.

“What a quick, sweet, and charming romance to brighten your day! A lovely debut by Kinzer that had me cheering for the unlikely, and yet-so-perfect, pair, Edith and Henry.” —Melissa Ferguson, author of Meet Me in the Margins
“Rarely have I read a romance with such sparkling personality. Everything about Kinzer’s vibrant voice and freshly told love story tugged at my heart strings and widened my smile.” —Rachel McMillan author of The Mozart Code
“Dear Henry, Love Edith is a heartwarming story that will keep you turning the pages to see how this unexpected romance grows and blossoms.” —Lisa Jordan, award winning romance author
“A rom-com treat for readers to devour.” —Bethany Turner, author of Plot Twist

Becca Kinzer lives in Springfield, Illinois where she works as a critical care nurse. When she’s not taking care of sick patients or reminding her husband and two kids that frozen chicken nuggets is a gourmet meal, she enjoys making up lighthearted stories with serious laughs. She is a 2018 ACFW First Impressions Contest winner, a 2019 Genesis Contest winner, 2021 Cascade Award winner, and all-around champion coffee drinker. Dear Henry, Love Edith is her debut novel.