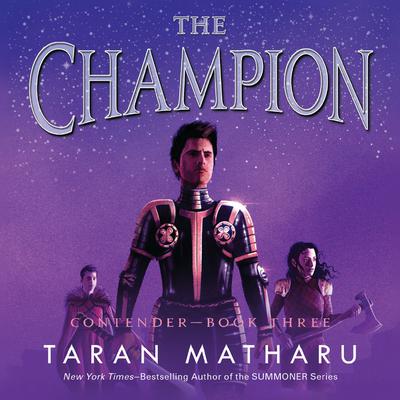 In Taran Matharu's The Champion, the explosive final book in the Contender trilogy, Cade and his friends wage the ultimate battle for their lives - and the fate of Earth itself - in the Game set by the cruel and mysterious Pantheon....

Cade has managed to survive the duel with the Hydra Alpha - barely. But the Games are far from over.

By order of their cruel and mysterious overlord, Abaddon, Cade and his friends are sent off to war against the Greys, a humanoid race who have far surpassed humans in technology on their home planet. This attempt to move up the leaderboard, however, leads Cade to a game-changing revelation: The Pantheon - the millennia-old alien masterminds behind the Games - have a weakness.

With the right artifacts scavenged from the land of Acies and a heavy dose of courage and luck, Cade has exactly one chance to end their tyranny forever. But if he fails, the lives of his friends - and the survival of Earth itself - will be forfeit.