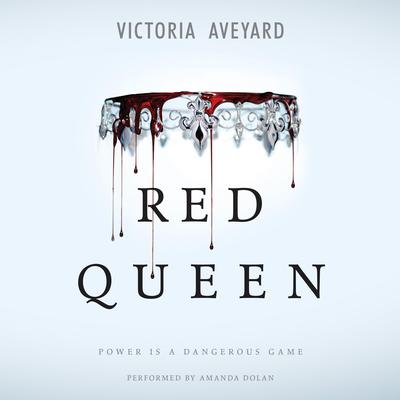 Mare Barrow's world is divided by blood—those with common, Red blood serve the Silver-blooded elite, who are gifted with superhuman abilities. Mare is a Red, scraping by as a thief in a poor, rural village, until a twist of fate throws her in front of the Silver court. Before the king, princes, and all the nobles, she discovers she has an ability of her own. To cover up this impossibility, the king forces her to play the role of a lost Silver princess and betroths her to one of his own sons. As Mare is drawn further into the Silver world, she risks everything and uses her new position to help the Scarlet Guard—a growing Red rebellion—even as her heart tugs her in an impossible direction.

One wrong move can lead to her death, but in the dangerous game she plays, the only certainty is betrayal.

“A sizzling, imaginative thriller, where romance and revolution collide, where power and justice duel. It’s exhilarating. Compelling. Action packed. Unputdownable.” —USA Today
“Breakneck pace and engaging characters…A solid debut from Aveyard and a welcome addition to the plethora of speculative teen lit.” —School Library Journal
“First-time author Aveyard has created a volatile world with a dynamic heroine, and while there are moments of romance, they refreshingly take a backseat to the action.” —Booklist
“[Aveyard] sets her audience up for a gaspworthy twist that reconfigures nearly every character’s role and leaves Mare with no one to trust but herself…This blend of fantasy and dystopia will be an unexpected and worthy addition to many genre fans’ reading list.” —Bulletin of the Center for Children’s Books
“Fascinating world building…Readers will be intrigued by a world that reflects today’s troubling issues concerning ethnic inequality, unfair distribution of wealth, pollution, warfare, political corruption, and the frightening power of the media.” —VOYA
“Aveyard weaves a compelling new world, and Mare and the two men in her life evolve intriguingly as class tension rises. Revolution supersedes romance, setting the stage for action-packed surprises. An inventive, character-driven twist breathes new life into tired fantasy trends.” —Kirkus Reviews
“Narrator Amanda Dolan uses strong, modulated tones to convey Mare’s long-held disdain of the Silvers, who use their powers to subjugate the Reds…Dolan narrates significant secondary characters with varied inflections, leading listeners to specific conclusions—until a shocking betrayal leaves Mare confronting the unknown. Listeners will breathlessly anticipate a sequel.” —AudioFile
“A wonderful mash up of ancient Rome and Marie Antoinette with a dash of Catherine Fisher’s Incarceron and Ridley Scott’s Gladiator, not to mention some of Marvel Comic’s box of tricks…Exciting and original.” —Sam Hawksmoor, author of the Repossession Trilogy
“Aveyard’s debut showcases her impressive worldbuilding skills, as readers are dropped into a divided, magical universe. Readers will root for Mare—and swoon over her love interests—as she navigates a merciless society.” —RT Book Reviews (4 stars)

Victoria Aveyard was born and raised in East Longmeadow, Massachusetts. She moved to Los Angeles to earn a BFA in screenwriting at the University of Southern California. She currently splits her time between the East and West Coasts. An author and screenwriter, she uses her career as an excuse to read too many books and watch too many movies.